CRUD word is an acronym of the following essential database functions.

The Read operation is used to retrieve data from a table and then it returns a result set which includes the records of the table. If we want to retrieve data of more than one table, we can use the JOIN operator. So we can create a logical relation between tables with the help of the JOIN operator. The SELECT statement plays a single primary role in the read operation. The SELECT statements are based on three parts:

Column part: In this part, we can define the columns from which we want to retrieve data.

Table part: In this part, we specify the table from which we want to get data.

Filter part: In this part, we can filter the data that we want to read. This part is not mandatory, so the SELECT statement can be executed without any filter part.

The simplest form of the select statement will be like the following form:

Now, we will go through the examples and reinforce our theoretical knowledge. At first, we need a sample table to read and for this reason, we will create a sample table with the help of the following query.

Reading all columns in the table

The asterisk (*) operator has wide usage in the SELECT statements because it returns all columns in the table. In the following example, we will return all columns and rows present in the table.

As you can see, in this select statement, we used the asterisk operator (*) and it allows us to return all columns of the table.

Reading particular columns of the table

In the SELECT statements, we can read the particular columns of the table. In the following example, we will return only the CountryName and CountryPopulation columns.

Using alias in the SELECT statements

In the SELECT statements, we can give temporary names to the table or to the columns and these temporary names are called aliases. Now, we will rewrite the previous two queries with table and column aliases. In the following query, the TblC alias will specify the table name.

The usage purposes of the alias are:

In SELECT statements, we can filter the result set through the WHERE clause. For example, if we want to filter the SELECT statement according to CountryName column and only return the data of Germany into resultset. The following query will perform read operation with a filter.

As you can see from the following image, the resultset of the query is sorted to ascending order.

Tip: You can use the column index in the ORDER BY clause and columns index numbers start by 1. We can also write the previous query as follows. Three (3) number indicates the CounrtyPopulation column. 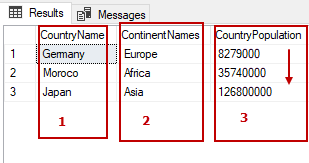 The UPDATE statement is used to modify the existing data in the table. The Update statement must include a SET clause so that we can define the target column in which we want to modify the data. The following query will change all rows of the CounrtyPopulation column value to 1.

In the UPDATE statements, we can use the WHERE clause so that we can modify particular row or rows in the table. Now, we will change the Japan row of CounrtyPopulation to 245000.

Actually, the UPDATE statement is a union of the delete and insert statements, so we can return the inserted and deleted values through the OUTPUT clause. Let’s make an example of it.

The Delete statement is used to remove existing row/rows in the table. At first, we will mention how to use the WHERE clause in the DELETE statements, just because most of the time we want to filter the deleted rows. In the following example, we will remove a particular row. 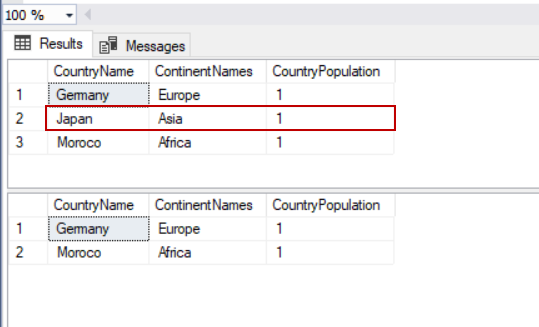 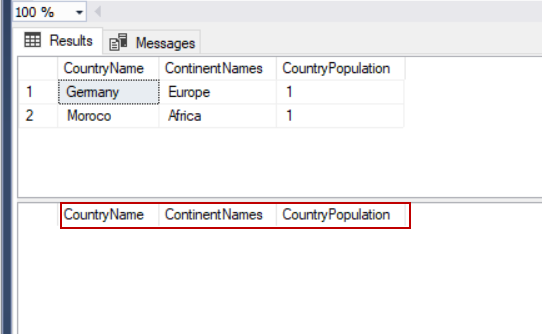 However, in some circumstances, according to database designs, the DELETE statement does not delete the row/rows if the DELETE statement violates the foreign key or other constraints. For example, in the AdventureWorks database, we cannot delete the ProductCategory table rows because ProductCategoryID is specified as a foreign key in the ProductSubcategory table. 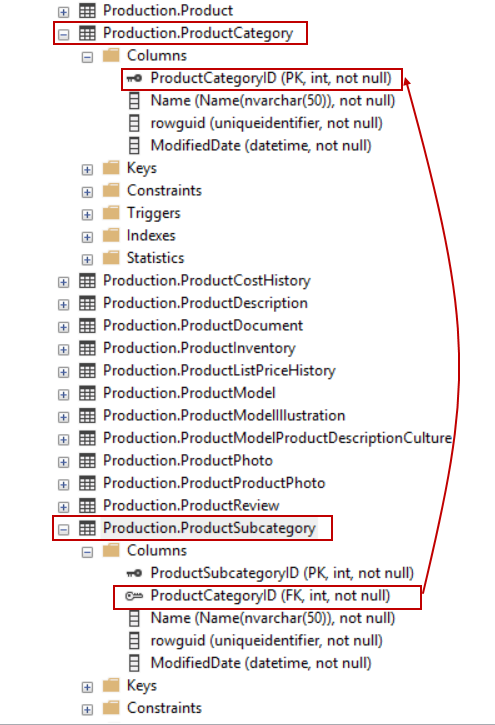 Now, we will try to delete a row in the ProductCategory table and no doubt we will face following error.

In this article series, we explored the CRUD operations in SQL. CRUD operation includes INSERT, SELECT, UPDATE and DELETE statements and these are the basic functions of the SQL database. If anyone wants to learn SQL database programming, CRUD theory could be a good starting point.