SQL FLOAT: 3 Points that Will Help you to Avoid Weird Math Errors

HomeDatabase administation, Work with dataSQL FLOAT: 3 Points that Will Help you to Avoid Weird Math Errors

Have you ever thought that SQL can be wrong in math? It sounds crazy. But if you’ve used the SQL FLOAT data type, you may have come across the problems I am about to show you.

The correct result is 1. But check Figure 1.

Do I have your attention now? I sure hope so. It’s quite scary to depend on a system that won’t give us correct math. But this article will help you avoid this.

There’s some work to do. We need to start from what a FLOAT data type is all about.

What is SQL FLOAT Data Type?

All these come at the cost of the loss of precision. Further, you can’t say where the decimal point will be placed after the computation – it floats. Meanwhile, exact numerics like DECIMAL will have a fixed decimal point position.

How You Declare an SQL FLOAT Data Type

The syntax is FLOAT[(n)], where n is the number of bits used to store the mantissa of a floating-point number in scientific notation. That also dictates the precision and storage size. The possible values for n are between 1 to 53. Note that n is optional.

If you do not specify n, the default is 53. That is also the maximum value. Further, FLOAT(53) is a double-precision floating-point number or binary64. Aside from using FLOAT(53), you can also declare it as DOUBLE PRECISION.

The following 3 declarations are functionally equivalent:

The table shows the number of bits and the corresponding storage size.

Is SQL FLOAT and REAL the Same?

REAL is also FLOAT(24). It is also referred to as single-precision or binary32.

Knowing that this is an approximate numeric will stop you from using it for calculations that require accuracy. Are you also concerned with storage and memory? Use REAL or FLOAT(24) if you don’t need too large or too small values.

What are the Differences Between FLOAT and DECIMAL?

FLOAT is an approximate numeric. DECIMAL is an exact numeric. Here’s a summary of the differences in a Table:

You already saw in Figure 1 how computing a FLOAT number can have weird results. If you change the data type to DECIMAL like this:

The result will be correct.
Using an inequality operator is also a problem. Check out the loop below.

What do you think? See Figure 2 below.

Boom! Infinite loop! The inequality condition will always be true. So, the logical choice is to change the type to DECIMAL.

The above code will surely stop when @decimalValue is equal to 5.0. See for yourself in Figure 3 below.

Nice! But if you still insist on FLOAT, this will work just fine without the infinite loop.

Meanwhile, rounding off is also off. Consider the following:

When FLOAT is Correct, and DECIMAL is Not

Are exact numerics NOT so exact all the time? To reproduce this problem, we will use a calculation, and then we reverse it. First, let’s have the data prepared.

The table above will use fixed values for the first 2 columns. The third column will have the calculation. Finally, the fourth one, which is a computed column, will do the reverse computation. The correct result in the computed column should be 1.

Now, to compare it to FLOAT, let’s create a similar table and data.

The results? Check out Figure 4.

What happened here? FLOAT got it right, but DECIMAL didn’t. Something has gone wrong.

IMPLICIT CONVERSION DOES IT AGAIN

Did a conversion really happen? Besides, every column in the ExactNumerics1 table is a DECIMAL.

Notice the red boxed area in Figure 3. The computed column is a DECIMAL(30,17), not a DECIMAL(8,4). According to official documentation, 2 DECIMAL columns with different precision and scale are 2 different data types. See for yourself here. Because of the difference, a conversion is required. So, implicit conversion comes into play.

What if they are different and an implicit conversion had happened?

Again, based on the official documentation, a loss of precision or scale can happen during implicit conversion. Thus, an explicit CAST is required. Note the DECIMAL data type in the conversion table in that reference.

Some loss just happened here. If the calculated column is also DECIMAL(8,4), the implicit conversion does not occur.

To avoid the implicit conversion, follow the official documentation. The table structure should have been like this:

The explicit CAST in the calculated column ensures that the data types are consistent. If we also follow this structure and insert the same data, the result will be correct. Check out the new output in Figure 6 below.

Eventually, exact numerics won’t be exact if an implicit conversion occurs between 2 or more DECIMAL values.

It gives you an idea of what you need for your tables and variables. Moreover, implicit conversion can make even exact numerics go bonkers. So, explicitly define the precision and scale and be consistent with it in your calculations.

Should I Use SQL FLOAT for Financial Data?

When calculating percentages in every slice of a pie graph, the sum should be 100%. Totals in the summary and detailed reports should also be consistent. If the accuracy of results is crucial, an approximate data type like FLOAT won’t do the job. The logical choice for this is DECIMAL.

But a question remains.

When Should You Use FLOAT?

Use FLOAT for data that requires astronomical values like distances between galaxies. Meanwhile, the DECIMAL data type will suffer an arithmetic overflow with this type of data. Tiny values like the diameter of an atomic nucleus will also fit using FLOAT. Scientific data and other values that don’t require precision can also benefit from FLOAT.

We don’t say that FLOAT is bad and DECIMAL is good or vice versa. Knowing the correct use cases for each will give you and your users the intended results. And then again, you want your users happy, right?

By the end of the day, we all want to do our jobs and be good at them. Math will always be part of our jobs. And knowing the correct numeric data types will also help us deal with it. It’s not hard if you know what you’re doing.

I hope this article has helped you avoid weird math in SQL Server.

Do you have anything else to add? Then, let us know in the Comments section. Share this also on your favorite social media platforms. 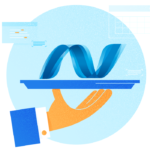 Next Story
Entity Framework – Just a Few Clicks Away

Relational databases represent an organization’s data in tables that use columns with different data types allowing them to store valid...
Read More →