This article is about developing a basic understanding of sqlcmd utility to run T-SQL commands directly from the command prompt without the need of SSMS (SQL Server Management Studio).

The article also highlights the importance of using a lightweight sqlcmd utility to perform some basic database tasks that would otherwise require getting connected to the database through a pre-installed database tool such as SSMS (SQL Server Management Studio) or SSDT (SQL Server Data Tools) followed by getting it ready to run SQL scripts against the desired database(s).

The sqlcmd utility can be a real time-saver for database developers and DBAs since they can straight away run the required SQL scripts from the command-line.

Let us begin by getting familiarised with the sqlcmd utility and its uses.

The sqlcmd utility is a command line tool that lets you run T-SQL commands directly from the command prompt.

According to the Microsoft documentation, the sqlcmd utility is a command-line utility for ad hoc, interactive execution of Transact-SQL statements and scripts and for automating Transact-SQL scripting tasks.

In order to use the sqlcmd utility, the user must have basic understanding of how to create and run T-SQL scripts.

There are two main uses of sqlcmd:

Some of the basic uses of the sqlcmd utility in light of the Microsoft documentation are as follows:

Apart from basic uses, sqlcmd has the following advanced uses:

The sqlcmd mode can be turned on in SSMS (SQL Server Management Studio) to run sqlcmd scripts due to a number of reasons including the following:

The sqlcmd utility is activated by the following methods:

Type sqlcmd on the Windows search box and press Enter: 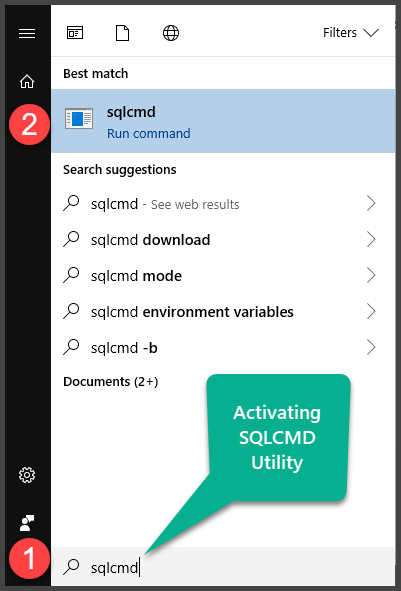 Please note that this method (typing sqlcmd only) works if you have an unnamed default SQL instance.

Another way to start the sqlcmd utility is to right-click the Windows icon and click Run and then type sqlcmd: 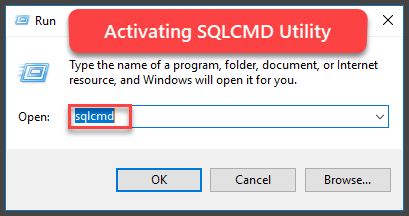 Please note this method (typing sqlcmd only) works if you have an unnamed default SQL instance, for named instance you have to specify the instance name. 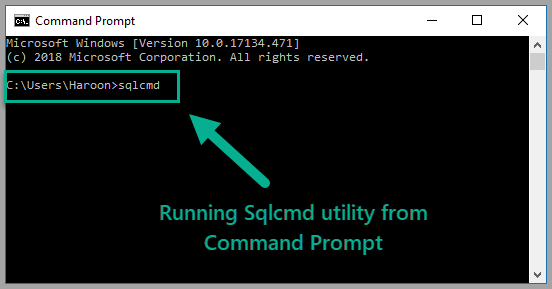 Note: Please note that typing “sqlcmd” in the command prompt window only works if you have a default unnamed SQL instance installed, otherwise you have to specify the name of the SQL instance to get connected to it through sqlcmd.

Using any of the above methods by typing sqlcmd will change the prompt showing 1> as follows: 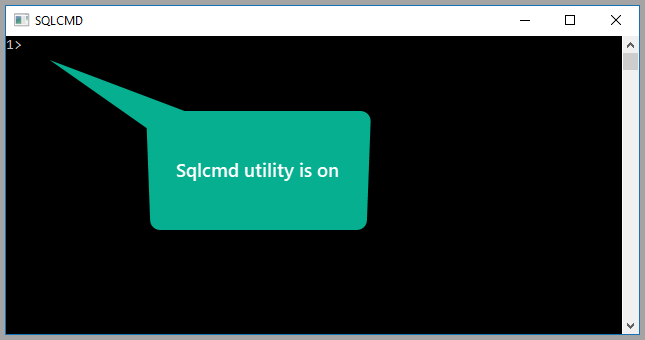 You will instantly notice that the prompt has changed to 1>, which means you are now connected to the default instance of SQL Server.

The sqlcmd utility (as it takes T-SQL commands directly) can help developers and DBAs in finding out the current version of their default SQL Server instance.

You can quickly find out the current version of the default instance by typing the following configuration function followed by the GO statement:

A sample output is as follows:

This is really handy since you don’t need to do the following steps to find out the version:

It can easily be observed that the sqlcmd approach is faster as compared to the SSMS (SQL Server Management Studio) method.

Remember to Use GO

You might have noticed that in the sqlcmd mode we are running T-SQL commands followed by Go statement.

Go serves as a batch terminator, which means all the queries before Go are executed in one go (at once) just like the way when we run multiple statements at once.

Let us give it a go by getting the version of the default instance and the language currently used by it followed by GO as follows: 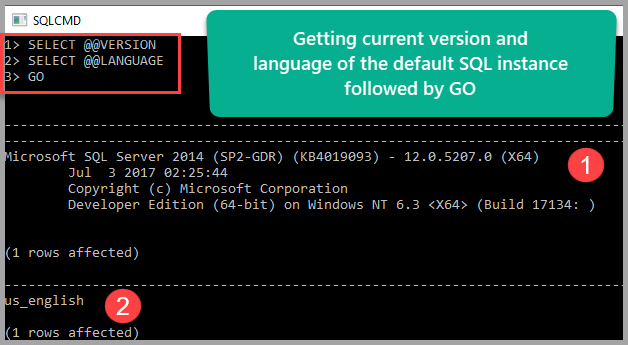 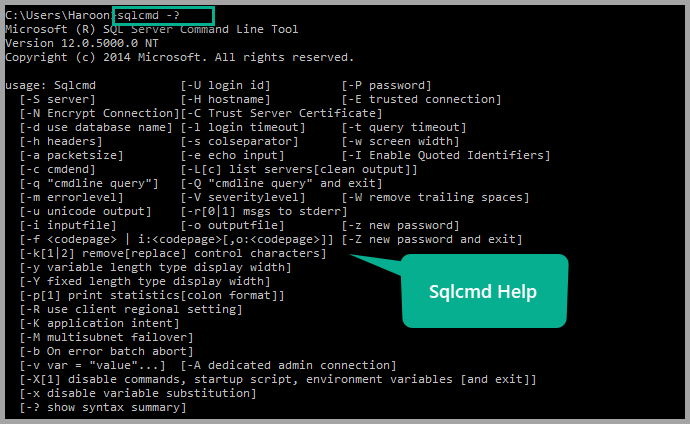 Sqlcmd is not limited to getting connected with a default unnamed SQL instance only.

Sqlcmd comes with a number of server options in which one such server option is -S to connect to any named SQL Server instance.

For example, if we have a named instance called  .\SQLTAB then get a fresh start by closing the current window and opening the Run dialogue box and typing the following command:

To confirm that you are connected to the named instance such ash .\SQLTAB, please use another handy configuration function @@SERVERNAME to check the name of the instance by typing the following code:

You can also connect to a named instance by specifying the computer using the –S server option by opening the Run dialogue and typing: 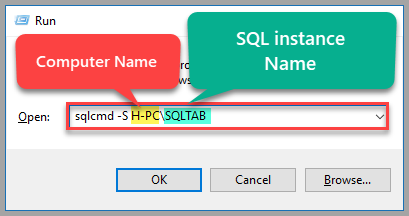 Let us now set up a sample SQL database using the sqlcmd utility.

First of all, let us create a setup script for a sample database called University:

Copy the entire script and save it to Notepad as SetupUniversityDatabase.sql file in the C:\ drive for testing purposes.

We use server option – i to get the script input from a file using the sqlcmd utility.

Open the command prompt window and type the following: 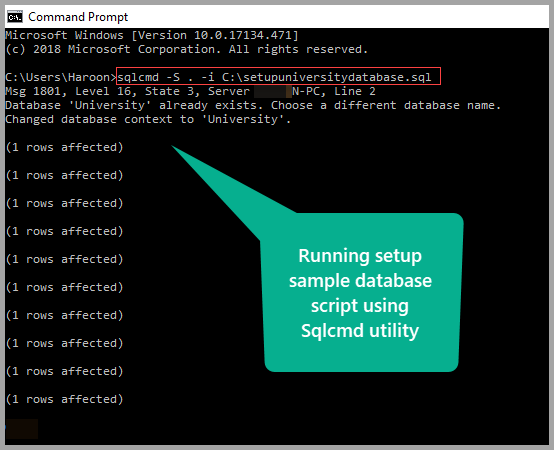 Type sqlcmd to connect to the default instance of SQL Server, then type the following code to check if the database has been successfully created or not:

The output shows that the database has been successfully set up through the sqlcmd utility: 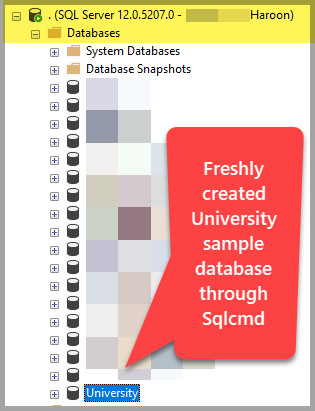 All done! You not only got familiar with basics but also successfully learned to setup a sample database using the sqlcmd utility without even opening SSMS (SQL Server Management Studio) which is very handy in scenarios where an infrastructure team has to quickly setup environment including sample databases.

In the next article, we are going to discuss slightly advanced uses of the sqlcmd utility.

Now that you are ready to run T-SQL scripts using the sqlcmd utility after going through this article, you can improve your skills further by trying the following things:

Haroon's deep interest in logic and reasoning at an early age of his academic career paved his path to become a data professional.

He began his professional life as a computer programmer more than 10 years ago working on his first data venture to migrate and rewrite a public sector database driven examination system from IBM AS400 (DB2) to SQL Server 2000 using VB 6.0 and Classic ASP along with developing reports and archiving many years of data.

His work and interest revolves around Database-Centric Architectures and his expertise include database and reports design, development, testing, implementation and migration along with Database Life Cycle Management (DLM).