Databases that serve business applications should often support temporal data. For example, suppose a contract with a supplier is valid for a limited time only. It can be valid from a specific point in time onward, or it can be valid for a specific time interval—from a starting time point to an ending time point. In addition, many times you need to audit all changes in one or more tables. You might also need to be able to show the state at a specific point in time or all changes made to a table in a specific period of time. From the data integrity perspective, you might need to implement many additional temporal specific constraints.

In a table with temporal support, the header represents a predicate with an at least one-time parameter that represents the interval when the rest of the predicate is valid—the complete predicate is, therefore, a timestamped predicate. Rows represent timestamped propositions, and the row’s valid time period is typically expressed with two attributes: from and to, or begin and end.

Of course, you can also implement both application and system versioned tables. Such tables are called bitemporal tables.

In SQL Server 2016, you get support for the system time out of the box with system versioned temporal tables. If you need to implement application time, you need to develop a solution by yourself.

The theory for the temporal data in a relational model started to evolve more than thirty years ago. I will introduce quite a few useful Boolean operators and a couple of operators that work on intervals and return an interval. These operators are known as Allen’s operators, named after J. F. Allen, who defined a number of them in a 1983 research paper on temporal intervals. All of them are still accepted as valid and needed. A database management system could help you dealing with application times by implementing these operators out of the box.

[table id=2 /]
In addition to Boolean operators, there are Allen’s three operators that accept intervals as input parameters and return an interval. These operators constitute simple interval algebra. Note that those operators have the same name as relational operators you are probably already familiar with: Union, Intersect, and Minus. However, they don’t behave exactly like their relational counterparts. In general, using any of the three interval operators, if the operation would result in an empty set of time points or in a set that cannot be described by one interval, then the operator should return NULL. A union of two intervals makes sense only if the intervals meet or overlap. An intersection makes sense only if the intervals overlap.  The Minus interval operator makes sense only in some cases. For example, (3:10) Minus (5:7) returns NULL because the result cannot be described by one interval. The following table summarizes the definition of the operators of interval algebra.

Overlapping Queries Performance ProblemOne of the most complex operators to implement is the overlaps operator. Queries that need to find overlapping intervals are not simple to be optimized. However, such queries are quite frequent on temporal tables. In this and the next two articles, I will show you a couple of ways to optimize such queries. But before I introduce the solutions, let me introduce the problem.

In order to explain the problem, I need some data. The following code shows an example how to create a table with validity intervals expressed with the b and e columns, where the begin and the end of an interval are represented as integers. The table is populated with demo data from the WideWorldImporters.Sales.OrderLines table. Please note that there are multiple versions of the WideWorldImporters database, so you might get slightly different results. I used the WideWorldImporters-Standard.bak backup file from https://github.com/Microsoft/sql-server-samples/releases/tag/wide-world-importers-v1.0 to restore this demo database on my SQL Server instance.

I created a demo table dbo.Intervals in the tempd database with the following code.

Please note also the indexes created. The two indexes are optimal for searches on the beginning of an interval or on the end of an interval. You can check the minimal begin and maximal end of all intervals with the following code.

Giving the Context to the Data

You might notice that I represent the beginning and ending time points as integers. Now I need to give the intervals some time context. In this case, a single time point represents a day. The following code creates a date lookup table and populates it. Note that the starting date is the 1st of July 2014.

Now, you can join the dbo.Intervals table to the dbo.DateNums table twice, to give the context to the integers that represent the beginning and the end of the intervals.

The following query searched for all of the intervals that overlap with the interval (10, 30). Note that the second condition (b2 ≤ e1) is turned around to (e1 ≥ b2) for simpler reading (the beginning and the end of intervals from the table are always on the left side of the condition). The given, or the searched interval, is at the beginning of the timeline for all intervals in the table.

The query used 36 logical reads. If you check the execution plan, you can see that the query used the index seek in the idx_b index with the seek predicate [tempdb].[dbo].[Intervals].b <= Scalar Operator((30)) and then scan the rows and select the resulting rows using the residual predicate [tempdb].[dbo].[Intervals].[e]>=(10). Because the searched interval is at the beginning of the timeline, the seek predicate successfully eliminated the majority of the rows; only a few intervals in the table have the beginning point lower or equal to 30.

This time, the query used 111 logical reads. With a bigger table, the difference with the first query would be even bigger. If you check the execution plan, you can find out that SQL Server used the idx_e index with the [tempdb].[dbo].[Intervals].e >= Scalar Operator((570)) seek predicate and [tempdb].[dbo].[Intervals].[b]<=(590) residual predicate. The seek predicate excludes approximately half of the rows from one side, while half of the rows from the other side is scanned and resulting rows extracted with the residual predicate.

There is a solution which would use that index for the elimination of the rows from both sides of the searched interval by using a single index. The following figure shows this logic. 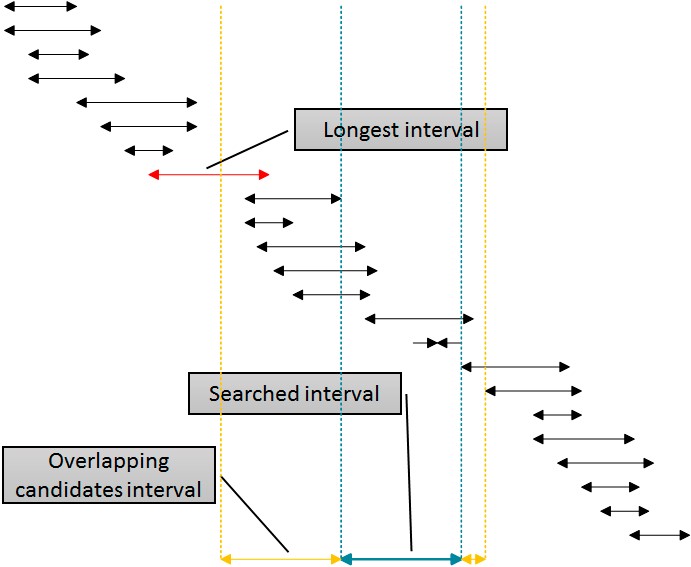 The intervals in the figure are sorted by the lower boundary, representing SQL Server’s usage of the idx_b index. Eliminating intervals from the right side of the given (searched) interval is simple: just eliminate all intervals where the beginning is at least one unit bigger (more to the right) of the end of the given interval. You can see this boundary in the figure denoted with the rightmost dotted line. However, eliminating from the left is more complex. In order to use the same index, the idx_b index for eliminating from the left, I need to use the beginning of the intervals in the table in the WHERE clause of the query. I have to go to the left side away from the beginning of the given (searched) interval at least for the length of the longest interval in the table, which is marked with a callout in the figure. The intervals that begin before the left yellow line cannot overlap with the given (blue) interval.

Since I already know that the length of the longest interval is 20, I can write an enhanced query in a quite simple way.

Of course, the figure could be turned around to cover the cases when the idx_e index would be more useful. With this index, the elimination from the left is simple – eliminate all of the intervals which end at least one unit before the beginning of the given interval. This time, the elimination from the right is more complex – the end of the intervals in the table cannot be more to the right than the end of the given interval plus the maximal length of all intervals in the table.

Please note that this performance is the consequence of the specific data in the table. The maximal length of an interval is 20. This way, SQL Server can very efficiently eliminate intervals from both sides. However, if there would be only one long interval in the table, the code would become much less efficient, because SQL Server would not be able to eliminate a lot of rows from one side, either left or right, depending which index it would use. Anyway, in real life, interval length does not vary a lot many times, so this optimization technique might be very useful, especially because it is simple.

Please note that this is just one possible solution. You can find a solution that is more complex, yet it yields predictable performance no matter of the length of the longest interval in the Interval Queries in SQL Server article by Itzik Ben-Gan (http://sqlmag.com/t-sql/sql-server-interval-queries). However, I really like the enhanced T-SQL solution I presented in this article. The solution is very simple; all you need to do is to add two predicates to the WHERE clause of your overlapping queries. However, this is not the end of possibilities. Stay tuned, in the next two articles I will show you more solutions, so you will have a rich set of possibilities in your optimization toolbox.

About the Author / Dejan Sarka

Dejan Sarka, MCT and SQL Server MVP, is an independent consultant, trainer, and developer focusing on database & business intelligence applications. His specialties are advanced topics like data modeling, data mining, and data quality. On these toughest topics, he works and researches together with SolidQ and The Data Quality Institute. He is the founder of the Slovenian SQL Server and .NET Users Group. Dejan Sarka is the main author or coauthor of fourteen books about databases and SQL Server, with more to come. Dejan Sarka also developed and is developing many courses and seminars for SolidQ, Microsoft and Pluralsight. He is a regular speaker at many conferences worldwide for more than 15 years, including conferences like Microsoft TechEd, PASS Summit and others.
← Previous Story
Automatic Deletion of Stuck Processes in MS SQL Server
→ Next Story
Automatic Data Collection about Completed Tasks in MS SQL Server