Developers are often told to use stored procedures in order to avoid the so-called ad hoc queries which can result in unnecessary bloating of the plan cache. You see, when recurrent SQL code is written inconsistently or when there’s code that generates dynamic SQL on the fly, SQL Server has a tendency to create an execution plan for each individual execution. This may decrease overall performance by:

One way this problem was handled in the past is Optimizing the instance for Ad Hoc Workloads. Doing this can only be helpful if most databases or most significant databases on the instance are predominantly executing Ad Hoc SQL. 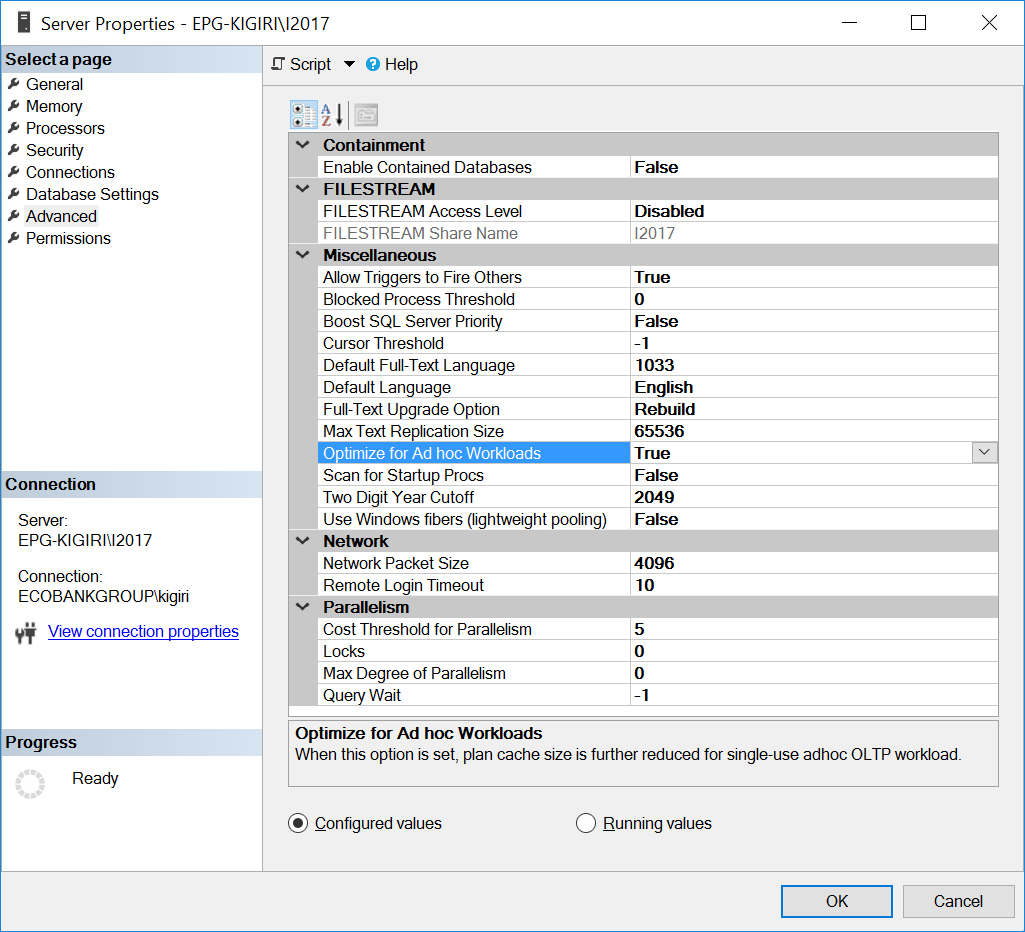 Essentially, this option tells SQL Server to save a partial version of the plan known as the compiled plan stub. The stub occupies much less space than the entire plan.

As an alternative to this method, some people approach the issue rather brutally and flush the plan cache every now and then. Or, in a more careful way, flush “single-use plans” by using DBCC FREESYSTEMCACHE. Flushing the entire plan cache has its downsides, as you may already know.

By using stored procedures, one can virtually eliminate the problem caused by Ad Hoc SQL. A stored procedure is compiled only once and the same plan is reused for subsequent executions of the same or similar SQL queries. When stored procedures are used to implement business logic, the key difference in the SQL queries that will be eventially executed by SQL Server lies in the parameters passed at execution time. Since the plan is already in place and ready for use, SQL Server will use the same plan no matter what parameter is passed.

In certain scenarios, the data we are dealing with is not distributed evenly. We can demonstrate this – first, we will need to create a table:

Our table contains data of club members from different countries. A large number of club members are from Ghana, while two other nations have ten and two members respectively. To keep focused on the agenda and for simplicity’s sake, I only used three countries and the same name for members coming from the same country country. Also, I added a clustered index in the ID column and a non-clustered index in the CountryCode column to demonstrate the effect of different execution plans for different values. 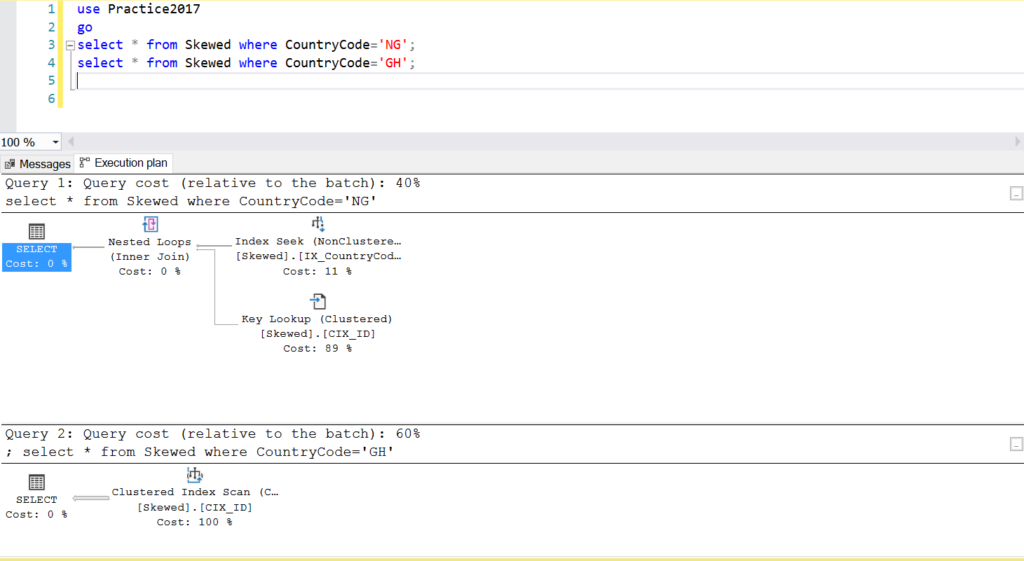 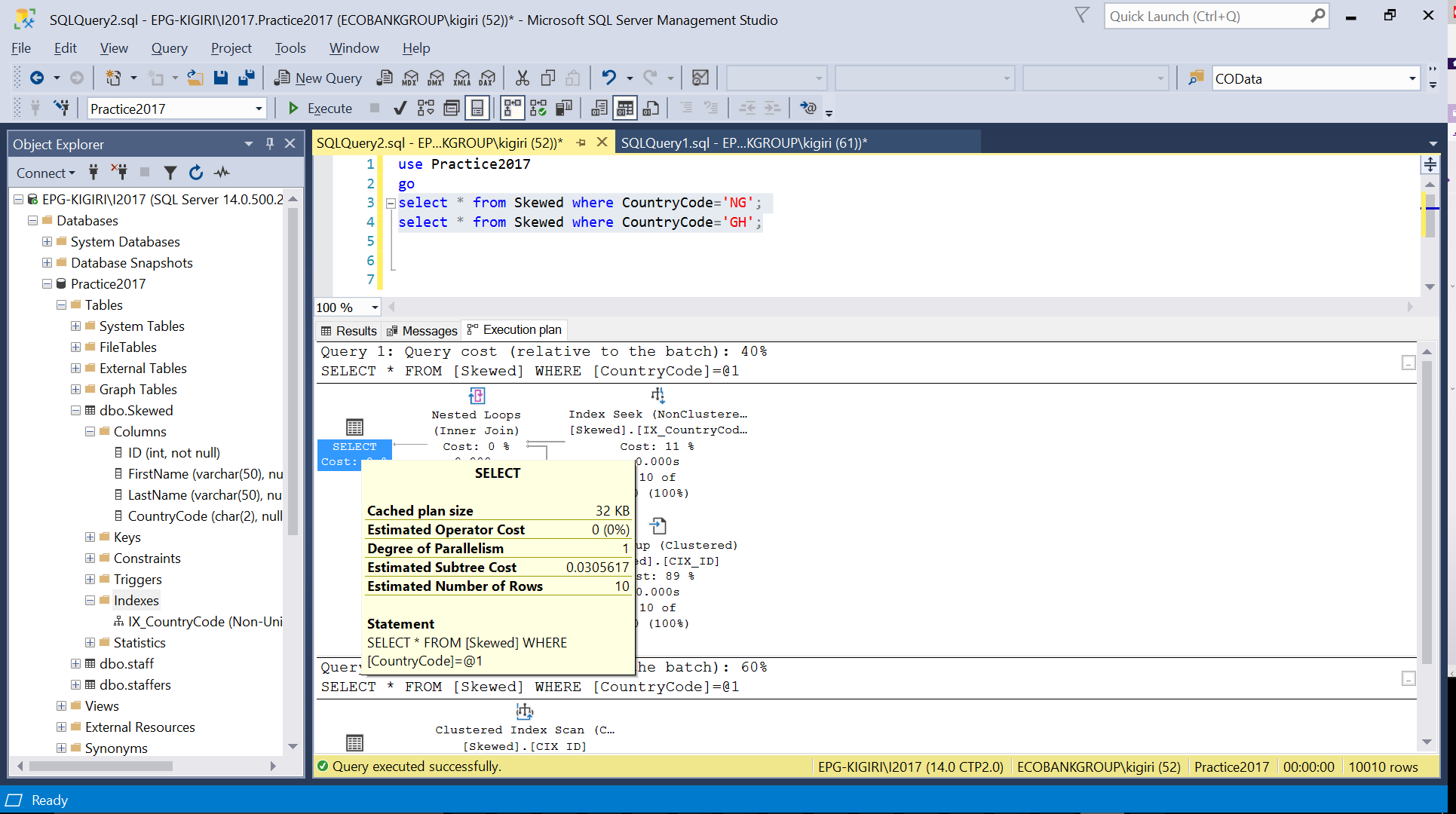 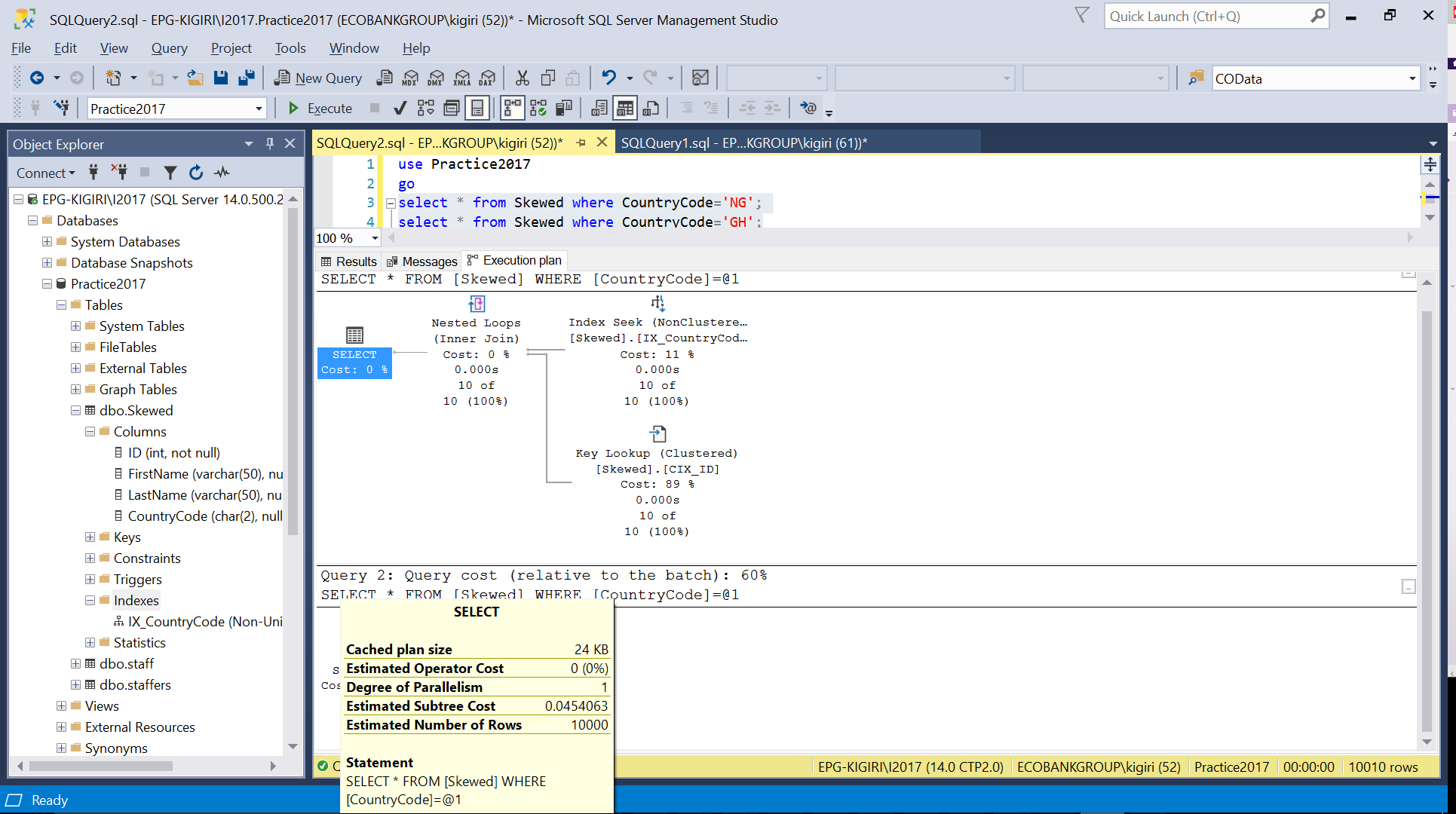 We can create a stored procedure to fetch the records we want by using the very same query. The only difference this time is that we pass CountryCode as a parameter (see Listing 3). When doing this, we discover that the execution plan is the same no matter what parameter we pass. The Execution plan that will be used is determined by the execution plan returned at the first time the stored procedure is invoked. For example, If we run the procedure with CountryCode=’GH’ first, it will use a full table scan from that point on. If we then clear the procedure cache and run the procedure with CountryCode=’NG’ first, it will use index-based scans in future. 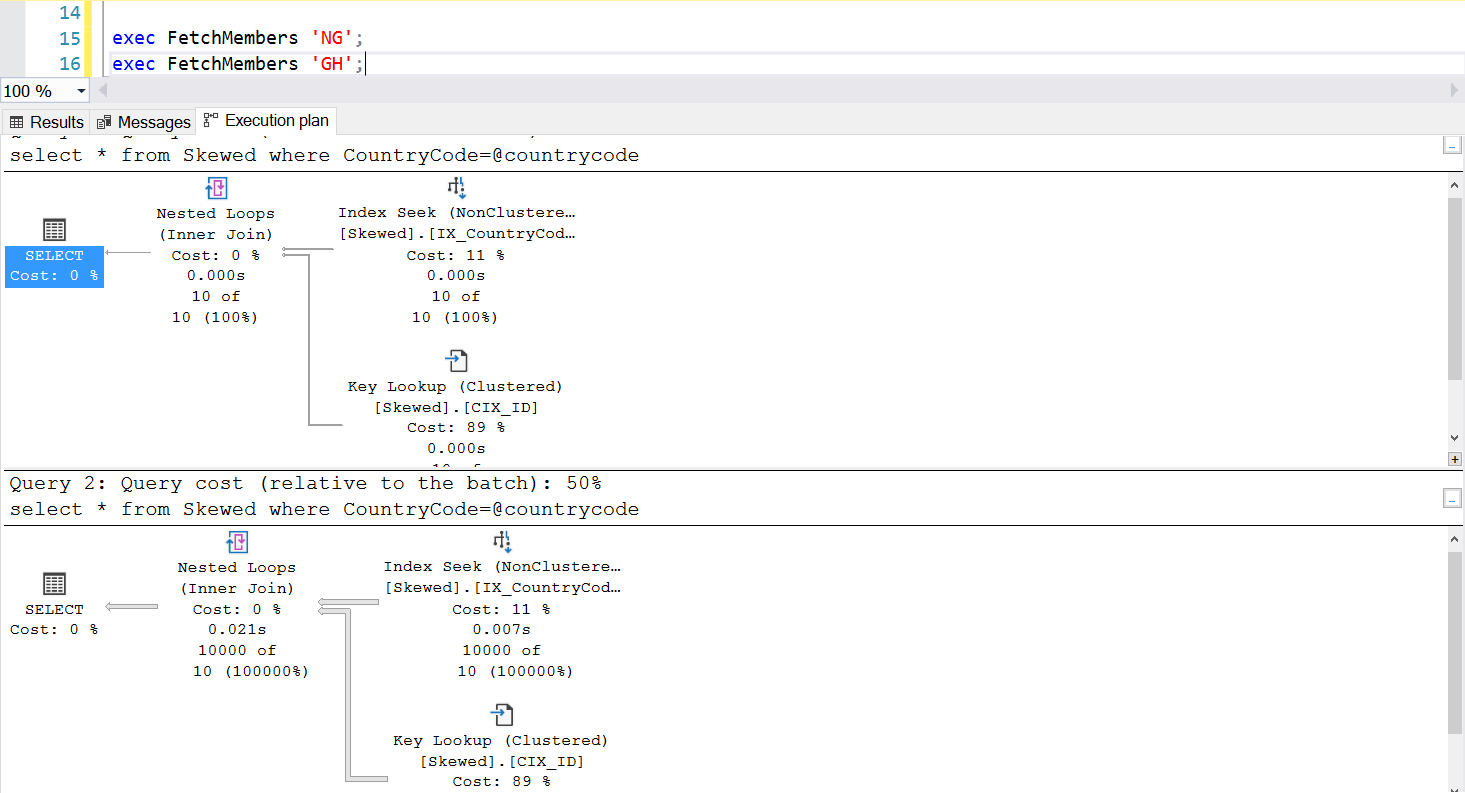 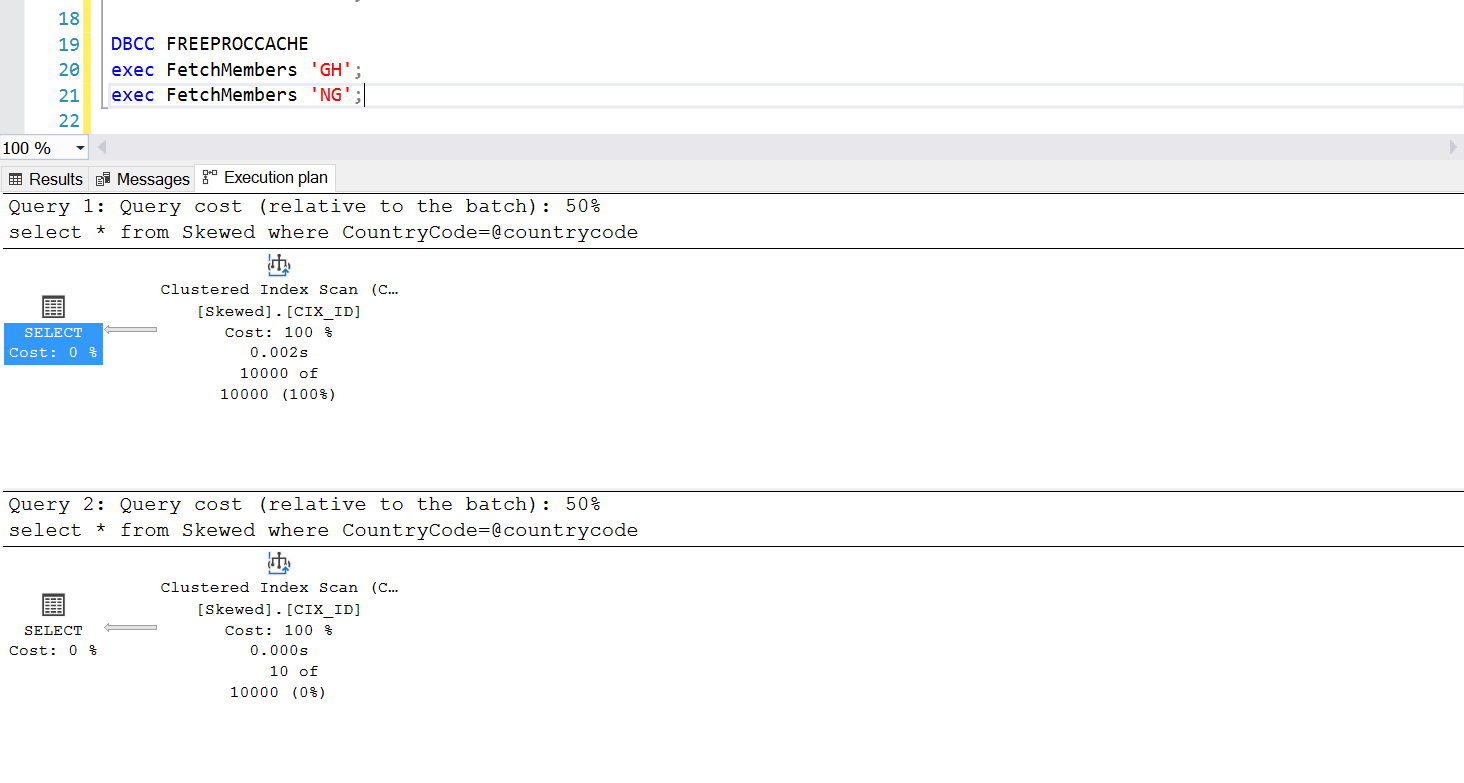 Execution of the stored procedure is behaving as designed – the required execution plan is used consistently. However, this can be an issue because one execution plan is not suited for all queries if the data is skewed. Using an index to retrieve a collection of rows almost as large as the entire table is not efficient – neither is using a full scan to retrieve only a small number of rows. This is the Parameter Sniffing problem.

One common way to manage the Parameter Sniffing problem is to deliberately invoke recompilation whenever the stored procedure is executed. This is much better than flushing the Plan Cache – except if you want to flush the cache of this specific SQL query, which is entirely possible. Take a look at an updated version of the stored procedure. This time, it uses OPTION (RECOMPILE) to manage the problem. Fig.6 shows us that, whenever the new stored procedure is executed, it uses a plan appropriate to the parameter we are passing. 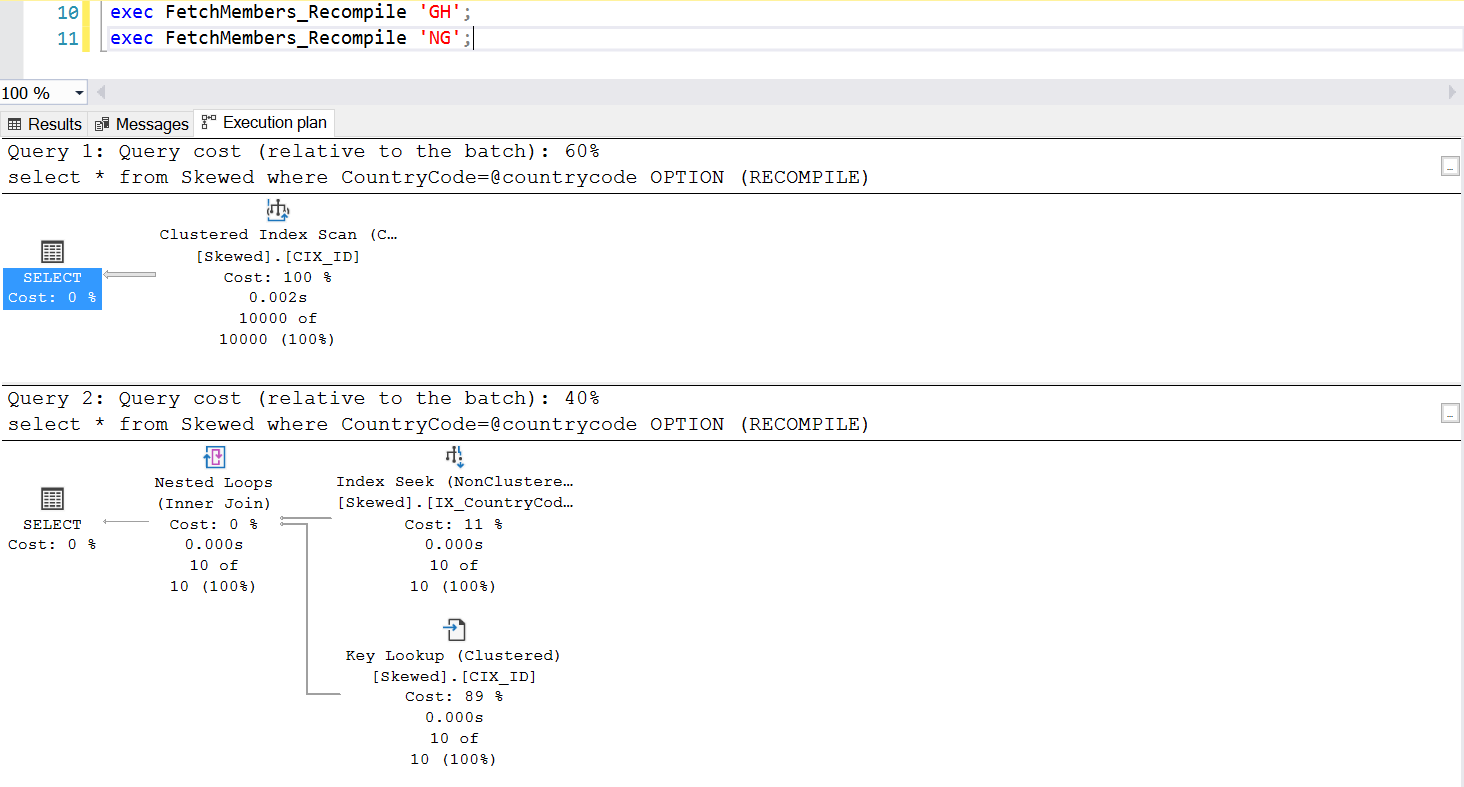 Fig. 7 Behaviour of the stored procedure with OPTION (RECOMPILE)

In this article, we have looked at how consistent execution plans for stored procedures can become a problem when the data we are dealing with is skewed. We have also demonstrated this in practice and learned about a common solution to the problem. I dare say this knowledge is invaluable to developers who use SQL Server. There are a number of other solutions to this problem – Brent Ozar went deeper into the subject and highlighted some more profound details and solutions at SQLDay Poland 2017. I have listed the corresponding link in the reference section.

Kenneth Igiri is an Enterprise Architect with eProcess International S.A., Ecobank Group's Shared Services Centre. Kenneth has over fifteen years' experience in Information Technology with nine of those years focused on SQL Server and Oracle databases. His interests include Database Performance, HADR, Cloud Computing, Data Architecture and Enterprise Architecture. Asides from work, Kenneth teaches at Children's Church, writes faith-based fiction and helps small businesses grow. You can connect with Kenneth via his blog https://kennethigiri.com, LinkedIn, or on Amazon.com.
← Previous Story
Auto Create Statistics and Auto Update Statistics
→ Next Story
How to Document Your SQL Server Database