If you need to store confidential data in your database, you can use data encryption. SQL Server supports encryption with symmetric keys, asymmetric keys, certificates, and password phrases. I assume that you, the reader, are already familiar with these terms. In this article, I will focus on two out of many encryption options provided by SQL Server:

The Transparent Data Encryption (TDE) protects the data at rest when it is not used. When the data is used, SQL Server decrypts it automatically. You can use the TDE for real-time encryption and decryption of the data and log files. You encrypt the data with the database encryption key (DEK), which is a symmetric key. It is stored in the database boot record and is therefore available already during the database recovery process. You protect the DEK with a certificate in the master database. You can also use an asymmetric key instead of the certificate; however, the asymmetric key must be stored in an EKM module. TDE uses the AES and Triple DES encryptions only. TDE was first implemented in SQL Server with version 2012.

You can use TDE on user databases only. You cannot export the database encryption key. This key is used by the SQL Server Database Engine only. End users never use it. Even if you change the database owner, you don’t need to regenerate the DEK.

SQL Server 2016 Enterprise Edition introduces a new level of encryption, namely the Always Encrypted (AE) feature. This feature enables the same level of data protection as encrypting the data in the client application. Actually, although this is a SQL Server feature, the data is encrypted and decrypted on the client side. The encryption keys are never revealed to the SQL Server Database Engine. This way, also a DBA can’t see sensitive data without the encryption keys, just by having sysadmin permissions on the SQL Server instance with the encrypted data. This way, AE makes a separation between the administrators that manage the data and the users that own the data.

The column encryption keys are stored in the database. Inside a SQL Server database, only the encrypted part of the values of column encryption keys are stored, together with the information about the location of column master keys. CEKs are never stored as a plain text in a database. CMKs are, as mentioned, actually stored in external trusted key stores.

An application can use the AE keys and encryption by using an AE enabled driver, like .NET Framework Data Provider for SQL Server version 4.6 or higher, Microsoft JDBC Driver for SQL Server 6.0 or higher, or Windows ODBC driver for SQL Server version 13.1 or higher. The application must send parameterized queries to SQL Server. The AE enabled driver works together with the SQL Server Database Engine to determine which parameters should be encrypted or decrypted. For each parameter that needs to be encrypted or decrypted, the driver obtains the metadata needed for the encryption from the Database Engine, including the encryption algorithm, the location of the corresponding CMK, and the encrypted value for the corresponding CEK. Then the driver contacts the CMK store, retrieves the CMK, decrypts the CEK, and uses the CEK to encrypt or decrypt the parameter. Then the driver caches the CEK, in order to speed up the next usage of the same CEK. The following figure shows the process graphically.

The figure represents the whole process in steps:

It is time to show how AE works through some demo code. First, let’s create and use a demo database.

Next, create the CMK in SSMS GUI. In Object Explorer, refresh the Databases folder to see the AEDemo database. Expnad this database folder, expand the Security subfolder, then the Always Encrypted Keys subfolder, and right-click the Column Master Key subfolder and select the New Column Master Key option from the pop-up menu. In the Name text box, write AE_ColumnMasterKey, and make sure you select the Windows Certificate Store – Local Machine option in the Key Store drop-down list, like the following figure shows. 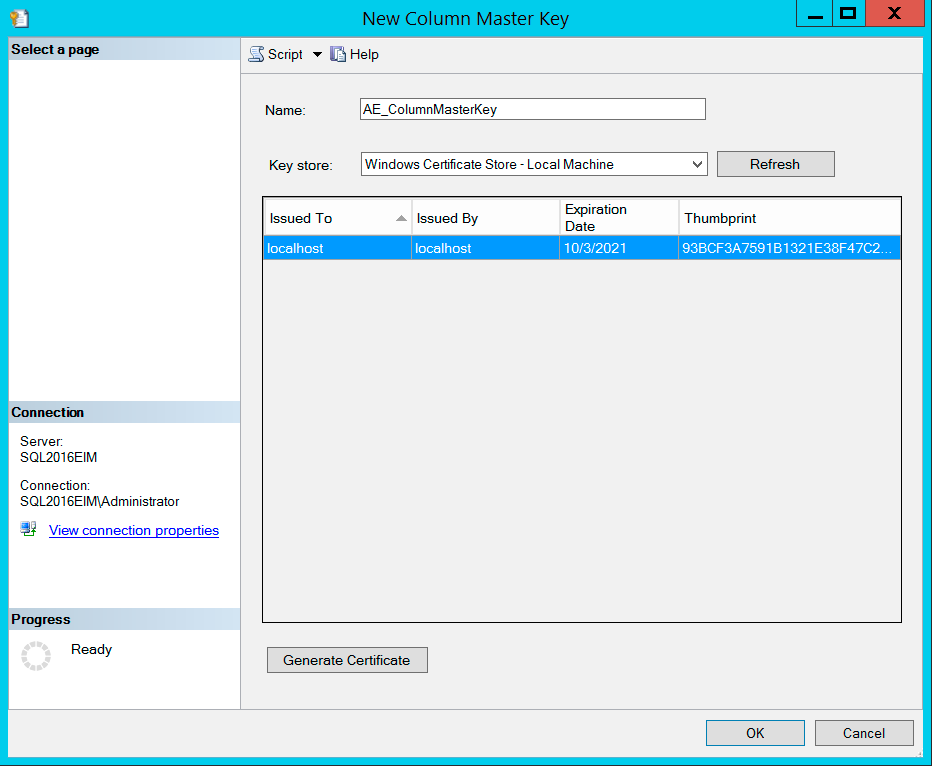 You can check if the CMK was created successfully with the following query.

Next, you create the CEK. In SSMS, in Object Explorer, right-click the Column Encryption Keys subfolder right under the Column Master Key subfolder and select the New Column Encryption Key option from the pop-up menu. Name the CEK AE_ColumnEncryptionKey and use the AE_ColumnMasterKey CMK to encrypt it. You can check whether the CEK creation was successful with the following query.

Currently, only the new binary collations, the collations with the BIN2 suffix, are supported for AE. Therefore, let’s create a table with appropriate collations for the character columns.

Now you can try to insert a row of data with the following statement.

You get the error 206, error text: “Operand type clash: nvarchar is incompatible with nvarchar(4000) encrypted with (encryption_type = ‘DETERMINISTIC’, encryption_algorithm_name = ‘AEAD_AES_256_CBC_HMAC_SHA_256’, column_encryption_key_name = ‘AE_ColumnEncryptionKey’, column_encryption_key_database_name = ‘AEDemo’)”. SQL Server cannot encrypt or decrypt the data. You need to modify the data from a client application. You can do a limited set of operations on the table from SQL Server. For example, you can use the TRUNCATE TABLE statement on a table with AE columns.

I created a very simple client Windows Console application in Visual C#. The application actually just retrieves the keys and inserts a single row into the table created with the code above. Here is the C# code.

You can run the C# code from Visual Studio in the debug mode or build the application. Then you can run AEDemo.exe application from the command prompt, or from SSMS in SQMCMD mode.

After you run the application, you should try reading the data from the same session in SSMS you used to create the table.

You can see only encrypted data. Now open a second query window in SSMS. Right-click in this window and choose Connection, then Change Connection. In the Connection dialog, click the Options button at the bottom. Type AEDemo for the database name and then click the Additional Connection Parameters tab. In the text box, enter “Column Encryption Setting=enabled” (without double quotes). Then click Connect.

Try again to insert a row from SSMS. Use the following query.

I got an error again. This SSMS version I am using still can’t parametrize ad-hoc inserts. However, let’s try to read the data with the following query.

This time, the query works, and you get the following result:

You have already seen some limitations of the Always Encrypted, including:

Please refer to Books Online for more detailed list of AE limitations. However, please also note the strengths of AE. It is simple to implement because it does not need modifications in an application, except the modification of connection strings. Data is encrypted end-to-end, from client memory through the network to database storage. Even DBAs can’t view the data within SQL Server only; even DBAs need access to the key storage outside SQL Server to read the CMK. AE and other encryption options in SQL Server provide a complete set of possibilities, and it is up to you and the business problem you are solving to select the appropriate method.

Transparent Data Encryption is extremely simple to use. However, the data protection is very limited. TDE protects the data at rest only. However, Always Encrypted is really a powerful feature. It is still not too complex to implement, and the data is completely protected. Not even a DBA can see it without having an access to the encryption keys. Hopefully, the limitations for AE, especially the collation limitation, will be removed in the future versions of SQL Server.

About the Author / Dejan Sarka

Dejan Sarka, MCT and SQL Server MVP, is an independent consultant, trainer, and developer focusing on database & business intelligence applications. His specialties are advanced topics like data modeling, data mining, and data quality. On these toughest topics, he works and researches together with SolidQ and The Data Quality Institute. He is the founder of the Slovenian SQL Server and .NET Users Group. Dejan Sarka is the main author or coauthor of fourteen books about databases and SQL Server, with more to come. Dejan Sarka also developed and is developing many courses and seminars for SolidQ, Microsoft and Pluralsight. He is a regular speaker at many conferences worldwide for more than 15 years, including conferences like Microsoft TechEd, PASS Summit and others.
← Previous Story
Single IoC Container in the HTTP-request: Web API vs. OWIN Middleware
→ Next Story
Execute Powershell in SSIS Using C#