Let’s prepare some dummy data that we will be using to execute our queries.
Execute the following script:

In the script above, we create Showroom database with one table Car. The Car table has five attributes. CarId, Name, Make, Model, Price and Type. Next, we added 12 dummy records in the Car table.

Let’s now see each of the analytic function in detail:

As per SQL Server Official Documentation, the cume_dist function is used to find the cumulative distribution of a value among the group of values. Simply speaking, the cumulative distribution value for a row can be calculated by dividing the rank of the row (as defined by the ORDER BY clause) by the total number of rows in the group. It is best explained with an example.

To execute the cume_dist function, the OVER clause is mandatory. Inside the OVER clause the ORDER BY clause is used to sort the data. In the script above, we SELECT the Name, Make, Model, Price and the cumulative distribution with respect to the ascending order of the Price.

The values for the cumulative distributions are mentioned in column “PriceDistribution”. You can see that the value for row 12 is 1. This is because at row 12, all the other rows have values less or equal to 12. Therefore, 12/12 =1. Similarly, look at the record 9 where the value is 0.75. This is because at row 9, at least 9 or less rows have price value less than the current row, therefore 9/12 is 0.75.

Similarly, the cume_dist function can also be used with partitioned data. Look at the following example: 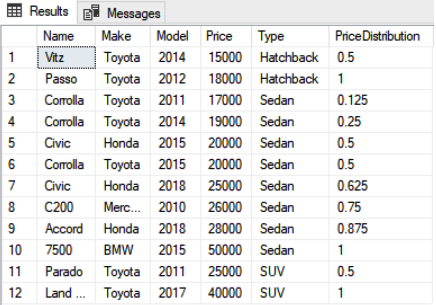 The first_value function retrieves the first value from the specified column for the records that have been sorted using the ORDER BY clause. Look at the following script: 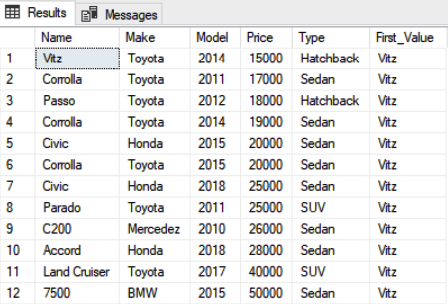 Since the car “Vitz” is the cheapest car or the first value in the sorted vehicle list, you can see this value in the “First_Value” column.

You can also use the first_value function with the PARTITION BY clause. You will see the first value from each partition in the output. Execute the following script: 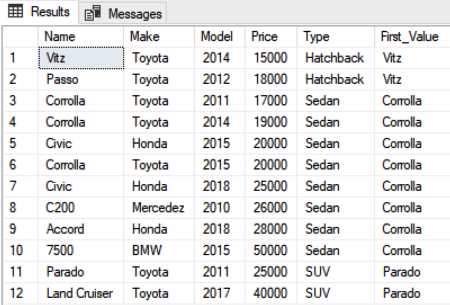 The last_value function is the reverse of the first value function and returns the last value for specific column from the ordered sequence. Execute the following script: 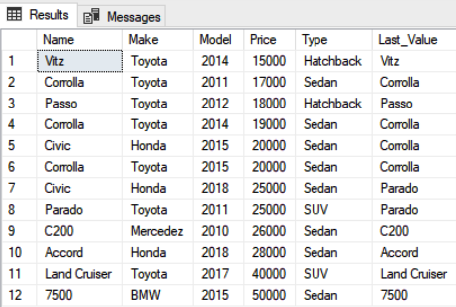 You can see that the output is not what we expected. The last value in the sorted price list is the 50,000 that belongs to BMW 7500, however we see different values in the Last_Value column.

The reason behind this behavior is that by default the range values used for ROWS in the Last_Value function are BETWEEN UNBOUNDED PRECEDING and CURRENT ROW. It means that the last value is selected from the start of the records and the current row. So in the first iteration, only the first row is taken into account and, hence, its name is added to the Last_Value column. Similarly, in the second iteration, the first two rows are evaluated and since the second row contains the last value, it has been added to the Last_Value column.

A solution to this problem is to specify UNBOUNDED PRECEDING AND UNBOUNDED FOLLOWING as the range for ROW. Look at the following script: 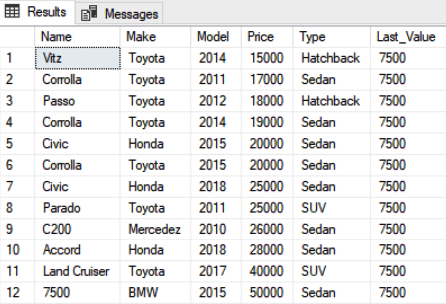 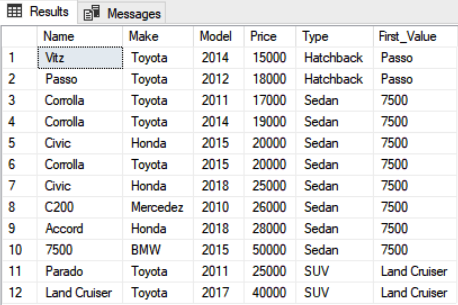 The lead function is used to retrieve the values from next N rows. The column from which the value is to be fetched and the number of rows to be offset is specified inside the lead function. Look at the following script:

In the script above, we specified it for each record by retrieving the values from the Name column of the next 1 and then 2 records. Here is the output: 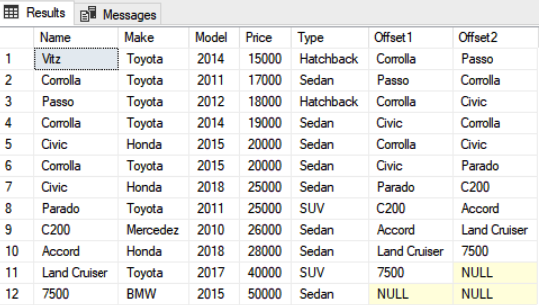 The lag function is reverse of the lead function and is used to retrieve the values from previous N rows. The column from which the value is to be fetched and the number of rows to be offset is specified inside the lag function

In the script above, we specified that for each record by retrieving the values from the Name column of the previous 1 and 2 records. Here is the output: 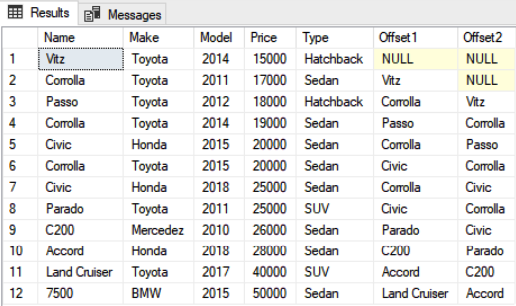