Events and Threads in .NET

I’d like to tell you straight off that this article will concern not threads in particular, but events in the context of threads in .NET.  So, I won’t try arranging threads correctly (with all blocks, callbacks, canceling, etc.) There are many articles on this subject.

All examples are written in C# for the framework version 4.0 (in 4.6, everything is slightly easier, but still, there are many projects in 4.0). I will also try to stick to C# version 5.0.

Firstly, I’d like to note that there are ready delegates for the .Net event system that I highly recommend to use instead of inventing something new. For example, I frequently faced the following 2 methods for organizing events.

I would recommend using this method carefully. If you don’t universalize it, you may eventually write more code than expected. As such, it won’t set a more precise structure if compared with the methods below.

From my experience, I can tell that I used it when I began working with events and consequently made a fool of myself. Now, I would never make it happen.

This method is quite valid, but it is good for specific cases when the method below does not work for some reasons. Otherwise, you may get lots of monotonous work.

And now, let’s take a look at what has been already created for the events.

As you can see, here we use the universal EventHandler class. That is, there is no need in defining your own handler.

Let’s take a look at the simplest example of the events generator.

Here we have a class with the Counter property that can be changed from 0 to 10. At that, the logic that changes Counter is processed in a separate thread.

And here is our entry point:

That is, we create an instance of our generator, subscribe to the counter change and, in the event handler, output values to console.

Here is what we get as a result:

So far, so good. But let us think, in which thread is event handler executed?

Most of my colleagues answered this question “In general one”. It meant that none of them did not understand how delegates are arranged. I will try to explain it.

The Delegate class contains information about a method.

There is also its descendant, MulticastDelegate, that has more than one element.

In general, the event handlers in the example above are executed in the thread generated in the DoWork() method. That is, during event generation, the thread that generated it in such a way, is waiting for execution of all handlers. I will show you this without withdrawing Id threads. For this, I changed few code lines in the above example.

Method where event is generated

In the handler, we send the current thread to sleep for a half a second. If handlers worked in the main thread, this time would be enough for a thread generated in DoWork() to finish its job and output its results.

However, here is what we really see: 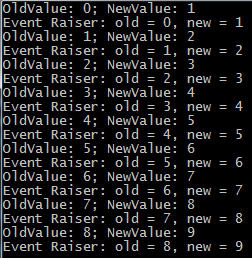 I don’t know who and how should handle the events generated by the class I wrote, but I don’t really want these handlers to slow down the work of my class. That is why, I will use the BeginInvoke method instead of Invoke. BeginInvoke generates a new thread.

Now, if we change the method in which the event is generated, we will get the following:

The last two parameters equal null. The first one is a callback, the second one is a certain parameter. I do not use callback in this example, since the example is intermediate. It may be useful for feedback. For instance, it can help the class that generates the event to determine, whether an event was handled and/or if it is required to get results of this handling. It also can free resources related to asynchronous operation.

If we run the program, we will get the following result. 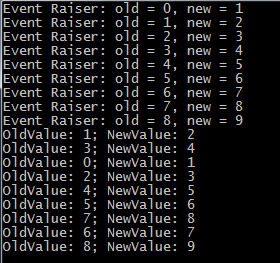 I guess, it is quite clear that now event handlers are executed in separate threads, i.e. the event generator does not care of who, how and how long will handle its events.

And here the question arises: what about sequential handling? We have Counter, after all. What if it would be a serial change of states? But I won’t answer this question, it is not a subject of this article. I can only say that there are several ways.

And one more thing. In order to not repeat the same actions over and over again, I suggest creating a separate class for them.

A class for generation of asynchronous events

In this case, we use callback. It is executed in the same thread as the handler. That is, after the handler method is completed, the delegate calls h.EndInvoke next.

Here is how is should be used

I guess, that it is now clear why the universal method was needed. If we describe events with method 2, this trick won’t work. Otherwise, you will have to create universality for your delegates on your own.

Note: For real projects, I recommend changing the events architecture in the context of threads. The described examples may afflict damage to the work of application with threads, and are provided for informative purposes only.

Hope, I managed to describe how events work and where handlers work. In the next article, I’m planning to dive deep into getting results of the event handling when an asynchronous call is made.

I look forward to your comments and suggestions.

About the Author / Anatoliy Yuzhikov

Since 2015, Anatoliy has been engaged in development on the .NET platform using C#, WPF, MSSQL. Currently, Anatoliy is switching to ASP.NET Core.
← Previous Story
Introducing Common Table Expressions in SQL Server
→ Next Story
Sliding Responsibility of the Repository Pattern

For some reason, we often do not use this functionality. Maybe we haven’t got used to it yet. And sometimes we use it, having no idea...
Read More →

In C#, there is one huge benefit, which is a drawback at the same time – an automatic garbage collection. With traditional desktop...
Read More →

In this article, I would like to share a solution of unexpected problem occurred in one of the projects I am currently working on. What...
Read More →