Everything you should know about SQL Server JOINS

HomeDatabase administation, Work with dataEverything you should know about SQL Server JOINS

The focus of this article is going to be on utilizing JOINs. We will start off by talking a bit about how JOINs are going to happen and why you need to JOIN data. Then we will take a look at the JOIN types that we have available to us and how to use them.

JOINs in TSQL are typically going to be done on the FROM line. 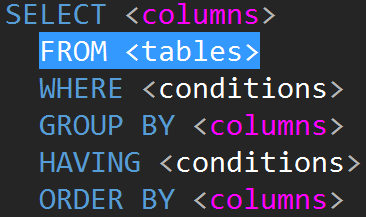 Before we are getting to anything else, the real big question becomes — “Why do we have to do JOINs, and how are we actually going to perform our JOINs?”

As it turns out, every database that we ever work with is going to have its data split up into multiple tables. There are many different reasons for this:

Thus, every database that you are going to be working with is going to need that data to be joined together in order for it to actually make sense.

For example, you have separate tables for orders and for customers. The question that becomes — “How do we actually connect all data together?” That is exactly what JOINs are going to do.

Imagine the case, when we have two separate tables and those tables are going to be brought together by creating a seam.

By the way, the CustomerID is known as a Primary Key for the left table, which uniquely identifies every single row inside the Customers table.

In the ServiceOrders table, we also have the CustomerID column, which is known as a Foreign Key. A foreign key is simply a column that is designed to point to another table. In our case, it is pointing back to the Customers table. Therefore, that is how we are going to bring all of that data together by providing that seam.

One big thing to note here is that we can JOIN multiple tables. In fact, it is quite common to JOIN multiple tables together, in order to get any form of information. If you take a look at the most common database, you may have to JOIN together four, five, six and more tables just to get the information you are looking for. Having a database diagram is going to be helpful. 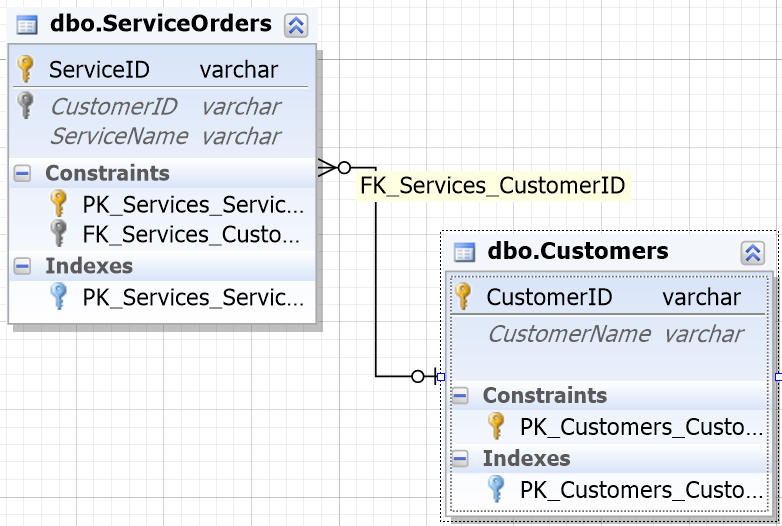 To help you out in most database environments you will notice that the columns designed to be JOINed have the same name.

It is possible to do JOINs on WHERE line:

A relation usually has a simple graphical interpretation in the form of a table.

For more information on the topic, feel free to check this article about the types of joins in SQL Server and learn how easy it is to write such queries with the help of SQL Complete.

The first type of JOINs that we may want to execute is the INNER JOIN. Usually, authors refer to this type of SQL Server JOINs as a regular or simple JOIN. They just omit the INNER prefix. This type of JOIN combines two tables together and only returns rows from both sides that match. 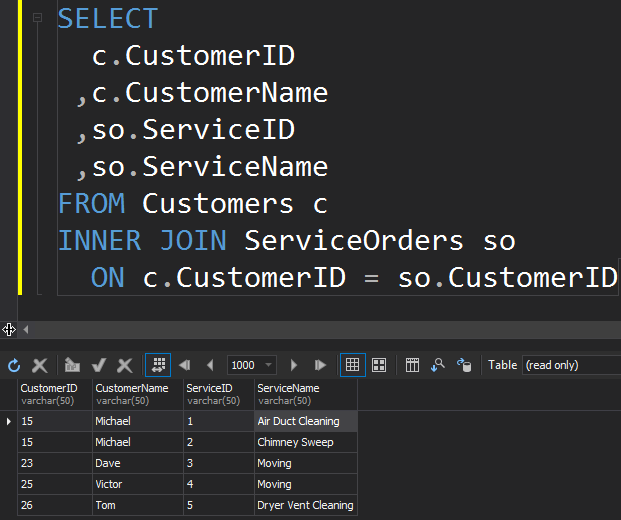 We do not see Klara and Anthony here because their CustomerID does not match in both tables. I want to also highlight the fact that the JOIN operation returns a customer each time that it matches the order. There are two orders for Michael and one order for Dave, Victor, and Tom each.

Outer JOINs are different because they return rows from tables or views even if they do not match. This type of JOIN is useful if you need to retrieve all customers who have never placed an order. Or, for example, if you are looking for a product that has never been ordered.

The way that we do our OUTER JOINs is by indicating LEFT or RIGHT, or FULL.

There are no differences between the following clauses:

However, I would recommend writing the complete clause because it makes the code more readable.

There is no difference between LEFT or RIGHT except the fact that we just point the table that we want to get the extra rows from.  In the following example, we listed customers and their orders. We utilize the LEFT to get all customers who have never placed orders. We ask SQL Server to get us extra rows from the left table. 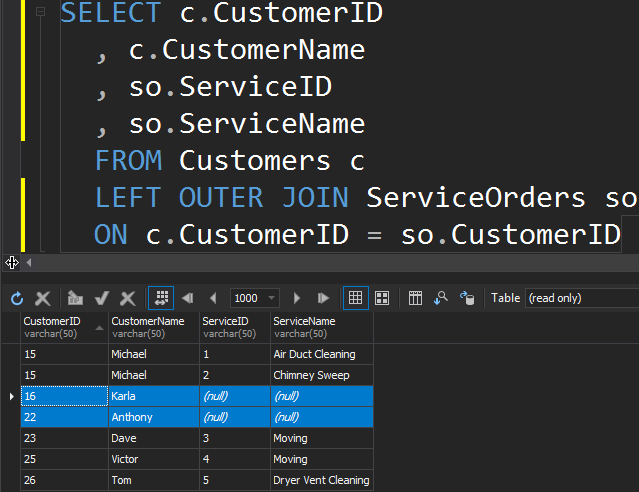 Note that Karla and Anthony have not placed any orders and as a result, we get NULL values for the ServiceName and ServiceID. SQL Server doesn’t know what to place in there, and it places NULLs.

To get the less popular service from the ServiceOrders table, we need to use the RIGHT direction. 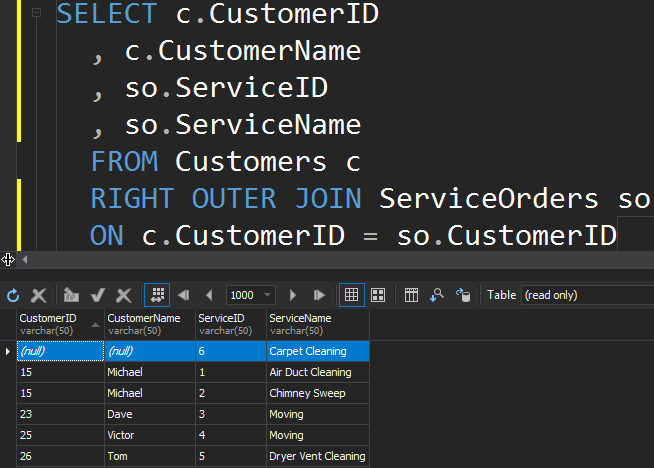 We see that in this case, SQL Server returned extra rows from the right table, and the Carpet Cleaning service has never been ordered.

This type of JOIN allows you to get the non-matching information by including non-matching rows from both tables. 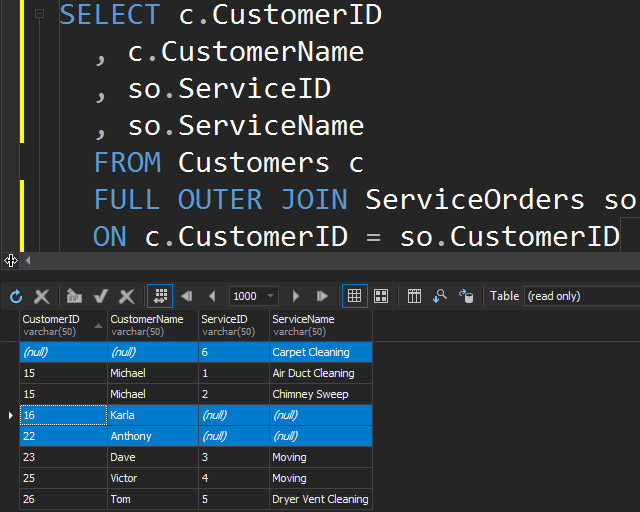 This may also be useful if you need to do a data cleanup.

The next type of JOINs that we have is SELF JOIN. This is probably the second least common type of JOIN that you are ever going to execute. A SELF JOIN is when you are joining a table onto itself. Generally speaking, this is a sign of poor design. To use the same table twice in a single query, the table must be aliased. The alias helps the query processor identify whether columns should present data from the right or left side. Additionally, you need to eliminate rows marching themselves. This is typically done with a non-equi join. 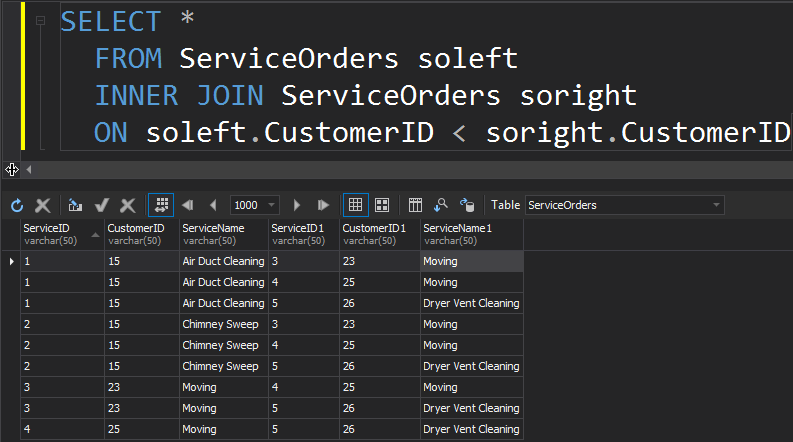 This type of JOINs does not have the ON statement. Every single row from each table is going to match. This is also known as Cartesian Product (in case a CROSS JOIN does not have a WHERE clause). You will hardly use this JOIN type in real-world scenarios, however, it is a good way to generate test data.

We get the same result when using the CROSS JOIN clause explicitly.

In the first part of the article, we have discussed logical JOIN operators SQL Server uses while query parsing and binding. They are:

A user does not write or use these types of JOINS. They are part of the SQL Server engine and SQL Server uses them internally to implement logical JOINs. When you explore the execution plan, you may note that SQL Server replaces logical JOIN operators with one of three physical operators.

Let’s start from the simplest operator, which is Nested Loop. The algorithm compares every single row of one table (outer table) to each row of the other table (inner table) looking for rows that meet the JOIN predicate.

The size of the input directly affects the algorithm cost. The input grows the cost grows also. This type of JOIN algorithm is efficient in case of small input. SQL Server estimates a JOIN predicate for every row in both inputs.

Consider the following query as an example, which gets customers and their orders. 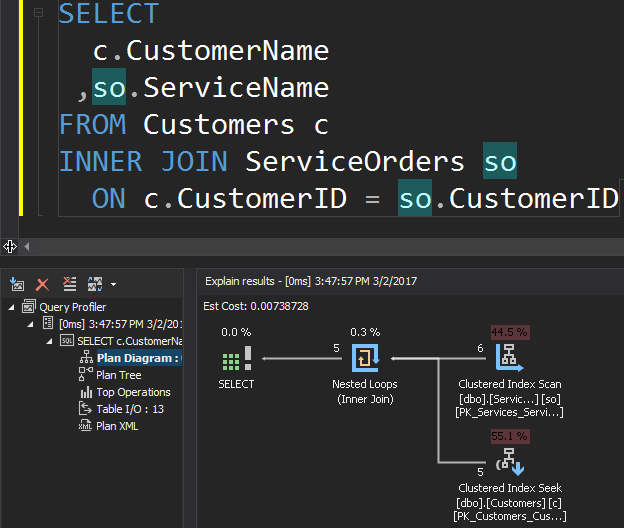 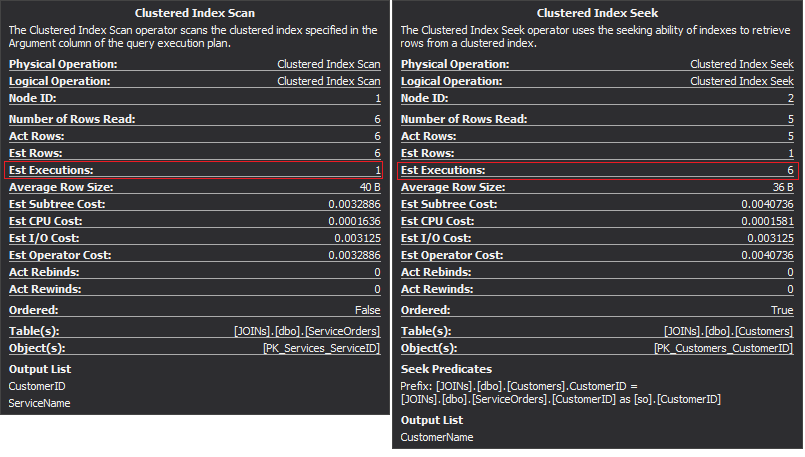 Let’s talk about the complexity. Suppose N is the row number for the outer output. M is the total row number in the SalesOrders table. Thus, the complexity of the query is O(NLogM) where LogM is the complexity of each seek in the inner input. The optimizer will select this operator every time when the outer input is small and the inner input contains an index in the column that acts as the seam. Therefore, indexes and statistics are essential for this JOIN type, otherwise SQL Server may accidentally think that there are not so many rows in one of the inputs. It is better to perform one table scan rather than performing Index Seek 100K times. Especially when the inner input size is more than 100K.

Some developers do not completely understand Hash and Merge JOINs and frequently associate them with poor performing queries.

As opposed to Nested Loop that accepts any JOIN predicate, the Merge Join requires at least one equi join. Additionally, both inputs must be sorted on the JOIN keys. 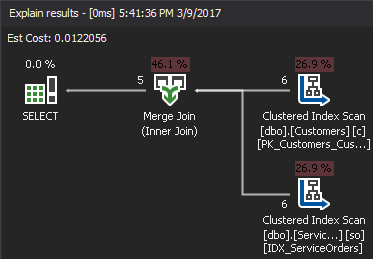 The pseudo-code for the MERGE JOIN algorithm: 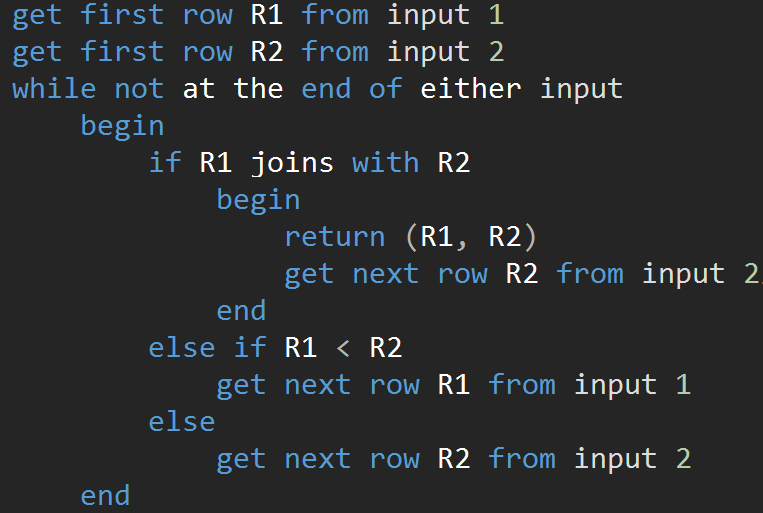 The algorithm compares two sorted inputs. One row at a time. In case there is an equality between two rows, the algorithm outputs join rows and continue. If not, the algorithm discards the lesser of the two inputs and continue. Unlike the Nested Loop, the cost here is proportional to the sum of the number of input rows. In terms of complexity – O(N+M). Therefore, this type of JOINs is often better for large inputs.

Hash Join is well suited for large tables without usable index. On the first step – build phase the algorithm creates an in-memory hash index on the left-side input. The second step is called the probe phase. The algorithm goes through the right-side input and finds matches using the index created during the build phase. If say to truth, it is not a good sign when the optimizer chooses this type of JOIN algorithm.

There are two important concepts underlying this type of JOINs: Hash function and Hash Table.

A hash function is any function that may be used to map data of variable size to data of fixed size.

A hash table is a data structure used to implement an associative array, a structure that can map keys to values. A hash table uses a hash function to compute an index into an array of buckets or slots, from which the desired value can be found.

Based on the available statistics, SQL Server chooses the smallest input as the build input and uses it to build a hash table in memory. If there is not enough memory, SQL Server uses physical disk space in TempDB. Once the hash table is created, SQL Server gets the data from the probe input (larger table) and compares it to the hash table using a hash match function. As a result, it returns matched rows. 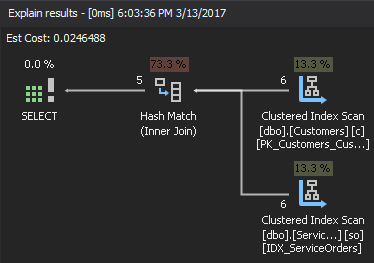 To estimate the complexity, assume the following:

The optimizer uses statistics to determine value cardinality. Then it dynamically creates a hash function that divides data into many buckets with equal sizes. It is often difficult to estimate the complexity of the hash table creation process, as well as the complexity of each hash match due to dynamic nature. The execution plan may even show incorrect estimations because optimizer performs all these dynamic operations during the execution time. In some cases, the execution plan may show that Nested Loop is more expensive than Hash Join, but in fact, the Hash Join executes slower due to the incorrect cost estimation.