Prior to SQL Server 2016, table-level security was the default lowest level of security for a database. In other words, a user could be restricted to access a table as a whole. However, in some cases we need users to have access to a table, but not to specific rows within the table. Prior to SQL Server 2016, this required custom stored procedures to be written for the provision of such fine-grained security. However, such stored procedures are prone to SQL injection and other security caveats.

SQL Server 2016 introduced a new row-level security feature which allows users to have access to a table but restricts them to accessing specific rows within that table. Let’s take a look at how this can be used practically.

There are four steps to implementing row-level security in SQL Server.

Before we perform the above steps, we need to create a dummy database with some dummy records. Execute the following script to do so:

In the script, we create a dummy database “University”. Next, we execute the script that creates a table named “Persons”. If you look at the table design, you can see that it contains three columns Id, Name and Role. The Id column is the primary key column with IDENTITY constraint. The Name column contains the name of the person and the Role column contains the role of the person. Finally, we inserted 10 records into the Persons table. The table has 1 Principal, 4 teachers, and 5 students.

Let’s execute a simple SELECT statement to see records in the table: 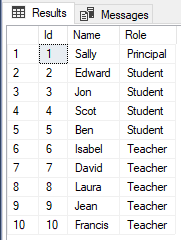 To implement the row level security, we will follow the steps that we discussed earlier.

Step 1: Grant Select Permissions to Users on the Table

Let’s create three users with roles Principal, Teacher, and Student and grant them SELECT access to these users on the Persons table. Execute the following script to do so:

Once the users have been granted permissions, the next step is to create a filter predicate.

The following script does that:

The filter predicate is created inside an inline table-valued function and takes the role of the user as a parameter. It returns those records where the Role value passed as a parameter matches the role value in the Role column. Or if the user role is ‘Principal’, all the roles are returned. If you look at the predicate filter, you will not find the table name for which we are creating the filter. The filter predicate is connected to the table via the security policy that we will see in the next step.

Execute the following script to create a security policy for the filter predicate that we created in the last step:

In the Security policy, we have simply added the filter predicate we created to the Persons table. To enable the policy, the “STATE” flag should be set to ON.

You will see nothing in the output since the default user cannot access the Persons table.

Let’s switch to the Student user that we created earlier and try to SELECT records from the Persons table:

In the script above, we switch to the ‘Student’ user, selected records from the Persons table and revert back to the default user. The output looks like this:

You can see that owing to the row-level security, only records where the Role column has a value of Student are displayed.

Similarly, the user Teacher will only have access to records where Role column has a value of Teacher. Execute the following script to verify this:

In the output, you will the following records:

Finally, in our filter predicate, we implemented the logic that the user Principal can access all the records. Let’s verify this by executing the following query:

In the output, you will see all the records as shown below: 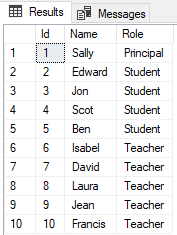 As a rule of thumb, if you plan to use a simple WHERE clause in the predicate function, your performance shouldn’t be impacted. On the other hand, complex join statements involving lookup tables should be avoided when you have implemented row-level security.