A logon trigger, as the name suggests, is a trigger that fires in response to a LOGON event in SQL Server.

In simple terms, a logon trigger fires whenever someone tries to establish a new connection to a database server. The trigger fires after the user authentication and the login phase completes but before the user session is actually initiated.

There are several advantages of logon triggers:

Before we get started, be sure that you are fully backed up.

The following script returns all the active user connections to a database.

sys.dm_exec_sessions is a system view that returns all the active user connections. The output of the above query looks like this:

The above query returns is_user_process and original_login_name as the first and second columns along with the rest of all the columns from the sys.dm_exec_sessions view. It sorts the results by descending order of the login time. Hence, the recent most connections appear at the top.

In the output, scroll down to the rows where the is_user_process column contains a 1.

In my case, I have two such rows as shown in the output below:

To count the total number of connections made by user processes, execute the following query:

The above query returns two since I have only two user_process connections on my server.

Let’s create a simple logon trigger that limits the total number of logins that can be made by one connection, to 3. If the connection tries to log in to the database server for the fourth time, the logon trigger rolls back the login process.

The script for this trigger is as follows:

In the script above we create a trigger named tr_CheckLogin. The trigger scope is set to server.

You can view the trigger details by going to Object Explorer -> Server Objects -> Triggers, as shown in the figure below: 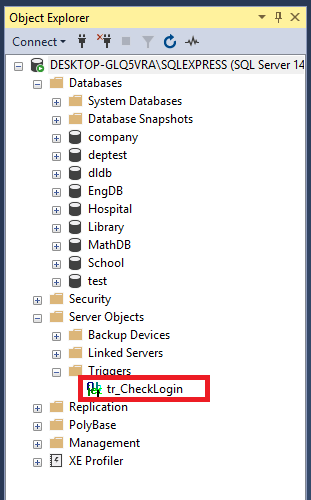 The trigger fires whenever the LOGON event takes place i.e. a connection tries to login into the server. Take a careful look at the body of the trigger.

The ORIGINAL_LOGIN function returns the name of the user process, or connection trying to login to the server. Next, the total number of connections with the same name is counted using the sys.dm_exec_session view. If the number of connections is greater than 3, the login is rolled back and a statement is printed to the user which reads: “More than three connections not allowed – Connection by ‘connection_name’ Failed”.

To verify this, open a new query window in the SQL Server management studio

Note: Previously, there are two connections open, one for SQL Server Management Studio and one for the Query window.

When you try to open a new query window, the tr_CheckLogin trigger will fire but since the total number of logins will be three at this point of time, the trigger will not roll back the login.

To verify that the total number of connection by user_process, execute the following query:

Now, there are total 3 user connections as shown in the output:

You will see following error:

To view the error log, execute the following script:

Ben Richardson runs Acuity Training. Acuity is an IT training business offering classroom courses in London and Guildford. It is a leading provider of SQL training the UK and offers a full range of SQL training from introductory training to advanced administration courses.
← Previous Story
How to Copy SQL Server Databases from One Instance to Another
→ Next Story
Jump to Start Test-Driven Database Development (TDDD)