New Features of C# To Be Expected Soon

HomeBasics of C#, Languages & CodingNew Features of C# To Be Expected Soon

In April 2003, C# 1.2. was released. Ever since all the versions have had the only major version. Now, if what the official page of roslyn on github  says is true, versions 7.1.and 7.2 are under development.

To try version 7.1, it is necessary to install the preview Visual Studio. You can download it from the official site.

When you go to the solution properties, it is possible to select the language version you are using. 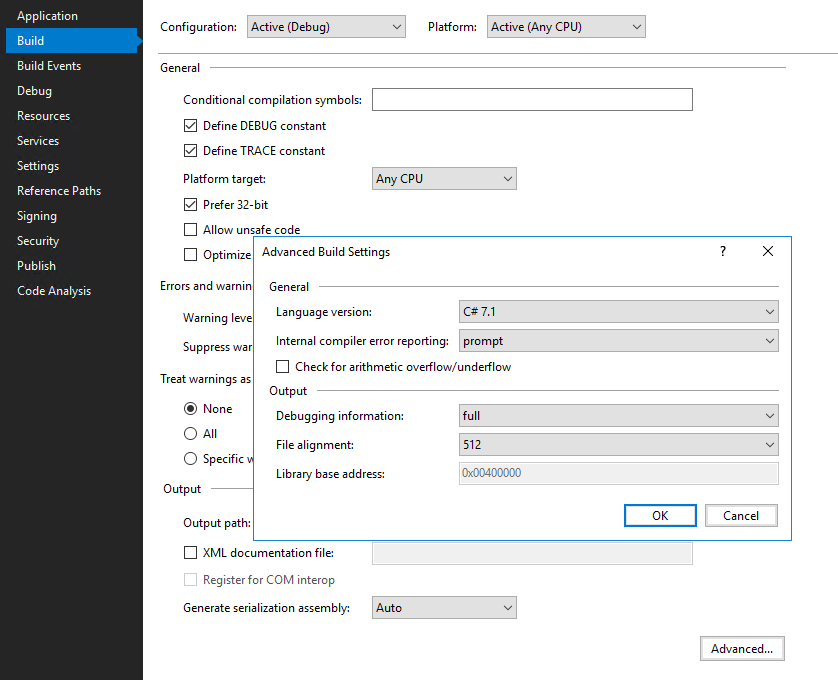 Asynchronous Main (it is going to be released in version 7.1)

Nowadays, there are programs to be completely asynchronous. So far, Main could be void or int and contain arguments as a string array. Now, several new overloads will be added:

As CLR does not support asynchronous entrypoints, a compiler creates a boilerplate code. It means that it automatically inserts some additional code that allows void to be cast to Task. Here is a the that may be generated by the compiler:

Like many others, I have expected this functionality to appear in the 7th version of the language.

Default Literal (it is going to be released in version 7.1)

There is the default(T) statement, which can be applied now.

Let’s consider how it can be used. Assume we have a method that accepts a string array as a parameter:

We can execute the method and pass a default value of the string array to it:

But why should we write default(string[]) if we can simply use default?

Starting from C# 7.1, you can use the default literal. What else can we do with it other than pass the default value to the method? For example, it can be used as a value for an optional parameter:

Or we can initialize a variable with the default value:

Additionally, we can check whether the current value is the default one:

Readonly ref (it is going to be released in version 7.2)

When adding structures to methods as ‘by value’, copying objects take place, which requires resources. Sometimes, there is a need in adding only one value of the reference object. In this case, developers send a value using the reference (ref) to save memory and add comments that the value must not be modified. Very often, this is true in math operations with the vector and matrix objects.

The example is as follows:

This function is still a prototype. However, I am sure that we need to use it. One of the suggested options is to use the keyword in instead of ref readonly.

It is better to use in as it is shorter than ref readonly.

Default interface methods (it is going to be released in version 8.0)

The concept of implementation in the interface sounds rather strange, although there are default interface methods in Java 8. So, C# developers want to have a similar functionality as well.

This functionality will allow an API writer to modify the method code for all the current interface implementations.

We will consider this on the particular example. Assume we have an interface where SomeMethod has the following implementation:

Now, create a class, which implements the interface:

And create an instance of the interface:

Now, we can call SomeMethod:

Optional tuple names (to be released in 7.1)

This functionality will allow you not to specify tuple names in some cases. If applicable, tuple elements may get optional names.

In this case, the first element of the tuple will get the f1 name, another one – f2.

Now, the tuple would be unnamed to which elements we could refer by item1 and item2.

Optional names are especially useful when using tuples in LINQ.

The main drawback of introducing this functionality is compatibility with C# 7.0. The example is as follows:

Still, we can accept this small compatibility failure, as the release period between 7.0 and 7.1 is small.

Tuple element name ‘y’ is inferred. Please use language version 7.1 or greater to access an element by its inferred name.

The full example of the code is as follows:

Note: If you use .NET 4.6.2 and lower versions, it is necessary to install the System.ValueTuple NuGet package to try this example.

About the Author / Alexey Sommer

Alexey Sommer is mostly working on UWP development. He has the MVP award in the Windows Development category, as well as MCP and MCSD certificates.
← Previous Story
Execute Powershell in SSIS Using C#
→ Next Story
OdataToEntity – an easy way to create .Net Core OData services

For some reason, we often do not use this functionality. Maybe we haven’t got used to it yet. And sometimes we use it, having no idea...
Read More →

In C#, there is one huge benefit, which is a drawback at the same time – an automatic garbage collection. With traditional desktop...
Read More →

Some questions may seem too basic, but they still contain tiny tricks. Sometimes even a simple question may nail to the wall. These...
Read More →

One Reply to “New Features of C# To Be Expected Soon”