Lightweight code review techniques, as distinct from formal inspections, are less official and must be a part of the modern software development process. Lightweight inspections can be divided into the following types:

Pair programming is a software development technique in which two programmers work together at a single computer. One, the driver, writes code while the other, the observer, reviews each line of code as it is typed in. The two programmers switch roles frequently.

It is important to adhere the following principles while programming in pair:

TDD is an excellent way to ensure robust test suite for all of your software development. However, there are some challenges. It is very easy to shortcut your tests a little by writing more than really needed. It is also easy to avoid testing the difficult cases.

The following illustration demonstrates the process. 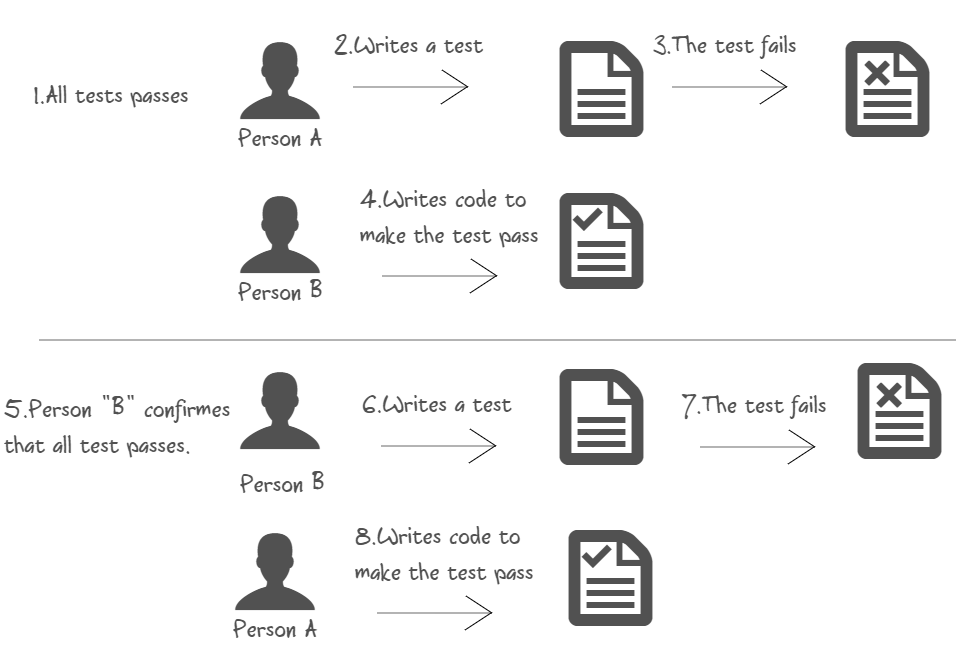 The difference from the TDD approach is that after failing a test, the other developer takes control. As far as control switches quite frequently, partners stay more engaged in what is going on. They do not have to implement the code for their own tests. Developers are much less likely to take shortcuts just to allow themselves to get by.

It is important to discuss all current and potential actions with the partner while writing code. Explain to your mate what do you do and why? If there are no subjects to discuss, you got the wrong direction. Avoid using the pair programming approach for simple and trivial tasks.

Concentrate on your work

The pair work must be planned in such a way to take the whole time interval from start to the end. Calls or meetings should not disturb developers.

The main problem of a regular code review is that the reviewers give not sufficient feedback while reviewing your code. However, when they start work with this code, you receive a lot of criticism and indication of all bottlenecks.

This type of review supposes that one person stands behind another and the code author steps through their code with the reviewer. When the team finds bugs, they work together to fix it on the spot or simply submit it to a bug tracking system.

This type of review may be accomplished by using a diff-tool. Typically you go through a change list and examine the changes between the current and previous versions of the files in that change list.
This lightweight method is suitable when developers are in the same office and can schedule the time to work together. It doesn’t work when developers are geographically separated.

This type of code review supposes that team members email the code to each other as it is developed and send feedback and comments back and forth. The author is responsible for collecting the files under review. Reviewers then have to extract those files from the email and generate differences between each version. It is easy to involve other people in this process, and it works well for geographically-distributed teams. However, it is hard to track issues or tie comments to the specific section of code they apply to.

As a matter of fact, the tool-assisted code review is the most popular and modern approach these days. It allows developers to review code without interruption from the main tasks, often right inside an IDE. There are a lot of extremely powerful tools and solutions on the market today. Such tools not only facilitates the review process but also provides a rich set of features like:

This is not commercial content, so please add your comments if you are interested in a detailed review (and demo) of the most popular tools for code review. If there will be at least 10 comments, I will create an article or a series of articles on this topic.

This article provides a walkthrough of database unit testing a stored procedure which contains a utility procedure within it. In this...
Read More →

As a rule, we start to develop database solutions by creating database objects, such as tables, views, stored procedures, etc., based on...
Read More →

Replacement of Algorithm Testing with Testing of Effects Being Inserted

As I expected, Rule 8 from the article “Rules for Implementing TDD in Old Project” stating that we don’t need to test the...
Read More →

The article “Sliding Responsibility of the Repository Pattern” raised several questions, which are very difficult to...
Read More →

One Reply to “Lightweight Code Review”