What is the MERGE statement?

Using the MERGE statement, we can change data in a target table based on data in a source table. Using it, we can execute INSERT, UPDATE and DELETE on the target tables within a single query block. It joins both tables using columns, common in both tables like the primary key. Based on how column data matches, changes apply to data of target table. The following image illustrates how “MERGE” works: 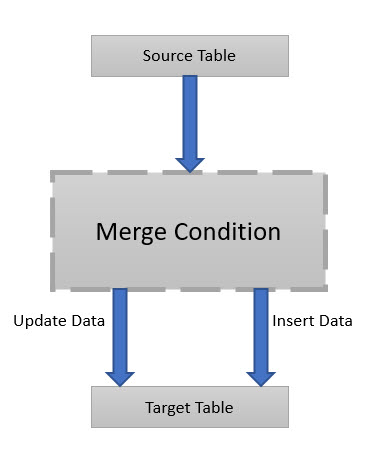 Using MERGE, we can get performance improvement because all three operations (INSERT, UPDATE, and DELETE) are performed in one pass. We do not need to write an individual statement to update changes in the target table.

The merge statement uses SourceTable and Destinationtable. It modifies DestinationTable based on the data of SourceTable. Both tables are compared using the condition, defined in the Merge Statement. This condition determines how SourceTable matches with destination table. It is like join conditions which are used to match rows.

Typically, matching should be done by matching unique identifiers like primary keys. For example, the Source Table is NewProduct and destination is Productmaster and the primary key is ProductID, then merge condition should be as following:

Following is the format of the MERGE statement:

To modify the data on the target table, MERGE supports following T-SQL clauses.

This clause will be used when we want to update or delete the records on the destination table. Here records are considered as matching when data within the joined columns are the same.

“WHEN NOT MATCHED [BY TARGET]” clause

“WHEN NOT MATCHED [BY SOURCE]” clause

This clause will be used when we want to delete or update a record in a source table which does not match a row in the target table.

Use MERGE when source and target are on a separate server

In this article, I am going to demonstrate how to perform insert, update and delete operation using MERGE, when the source and target tables are in separate servers. For example, a pharmaceutical company uses inventory software. Master databases of a software and transactional databases of software are on separate database servers. The following is a setup:

The company has added an ordered few products. I want to perform a few cleanup processes while updating the stock of products. Following is the list of tasks which must be performed.

Following is the flow chart: 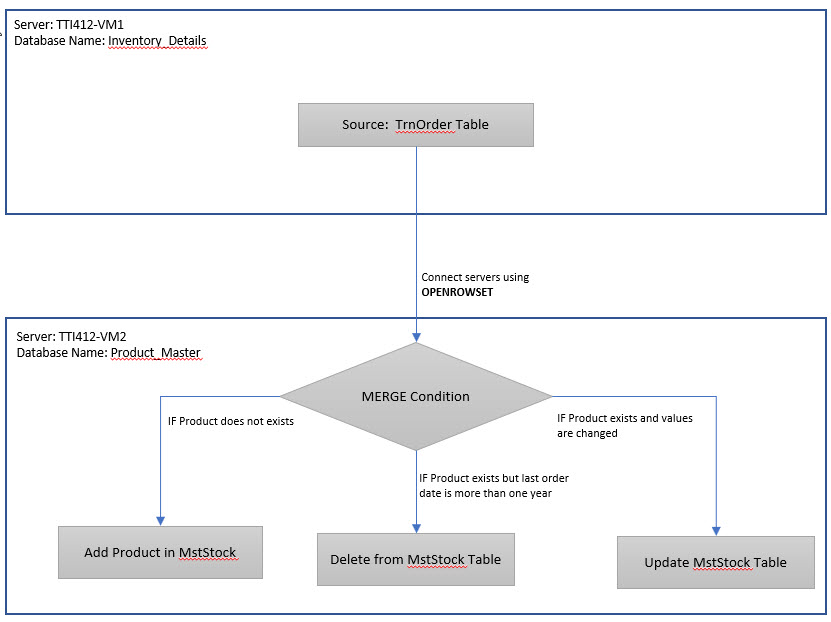 First create a target table named MstStock and MstProduct on the Product_Master database, located on the TTI412-VM2 server. Execute the following query:

Now add some data to both tables.

Execute the following query to add data to the MstProduct table:

Execute the following query to add data to the MstStock table:

Execute the following “Select” queries to review the output of tables. 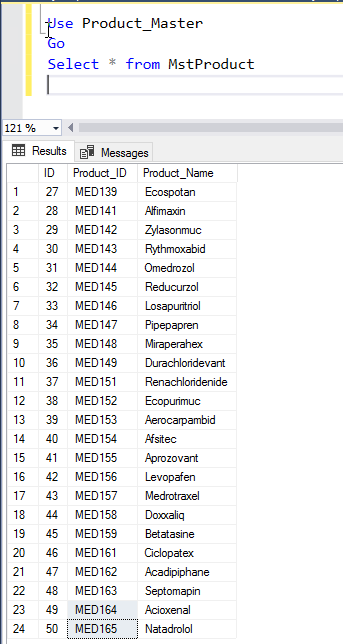 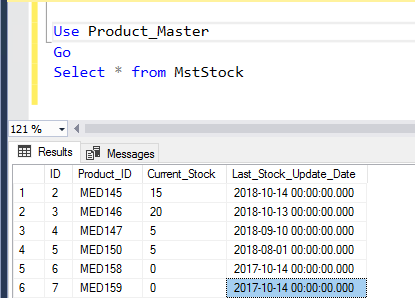 Secondly, create a source table named TrnOrder on the Inventory_Details database, located on the TTI412-VM1 server. Execute the following query:

Execute the following query to add data to the MstStock table:

Execute the following “Select” query to review the output of the table. 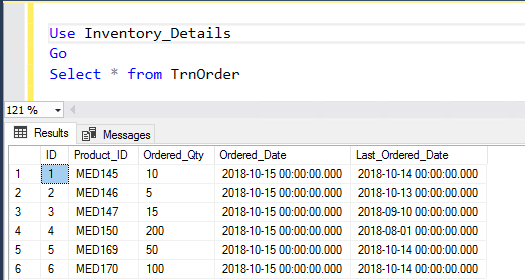 As I mentioned, we want to update the values in “table which is created on a remote server. We can access data from a remote database server by using the following methods.

In this article, we will use the OPENROWSET method to access data of the remote table. To query a remote server using the OPENROWSET function, we must enable the Ad hoc Distributed Queries configuration parameter.

“Ad hoc Distributed Queries” is an advanced option, hence firstly we must enable the Show Advanced option configuration parameter. To do that, execute the following command in the Query window of SQL Server management studio.

As I mentioned, firstly we must import data from the remote table. To do that, create a temp table and import data using the OPENROWSET function.
The following query will create a global temporary table.

Once the temp table is created, let’s load data from a source table which is located on a remote server. To do that, execute the following query:

Step 1: If a product exists in MstStock (Target Table) and TrnOrder (Source Table) then update the current quantity in MstStock

To do that, use the WHEN MATCHED clause.  The clause joins Source and Target tables on the common columns of both tables. The Product_ID column is common between MstStock and ##Source_Trn_Table, hence use it to join both tables.

Value of Current_Stock column of 4 products should be updated. Execute the following query to verify the output:

Pharmacy store had ordered a few products. Those products were added in MstProduct table but not added to the MstStock table. To add those products in the MstStock table, I will use the WHEN NOT MATCHED [TARGET] clause. The clause joins source and target tables using common columns. If matching rows are not found in the target table than it inserts rows from the source table.

To add products to MstStock using the MERGE table, execute the following code:

Two products IDs, MED169 and MED170, should be added. Execute the following query to review output:

The WHEN NOT MATCHED [SOURCE] clause joins source and target tables using common columns. If matching rows are not found in the source table than it deletes rows from the target table.

To remove products from the MstStock table, execute the following code:

Two products IDs, MED158 and MED159 should be added. Execute the following query to review output: 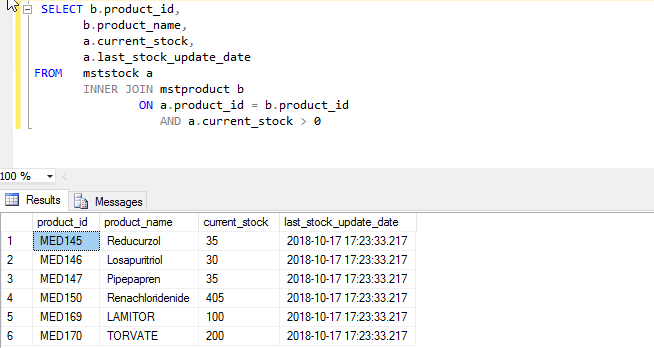 In this article I have covered as follows:

Nisarg is a SQL Server Database Administrator and Microsoft certified professional who has more than 5 years of experience with SQL Server administration and 2 years with Oracle 10g database administration. He has expertise in database design, performance tuning, backup and recovery, HA and DR setup, database migrations and upgrades. He has completed the Bachelors in Information Technology from Ganpat University.