The RANK, DENSE_RANK and ROW_NUMBER functions are used to retrieve an increasing integer value. They start with a value based on the condition imposed by the ORDER BY clause. All of these functions require the ORDER BY clause to function properly. In case of partitioned data, the integer counter is reset to 1 for each partition.

In this article, we will study the RANK, DENSE_RANK and ROW_NUMBER functions in detail, but before that, let’s create dummy data that these functions can be used on unless your database is fully backed up.

Execute the following script to create a database called ShowRoom and containing a table called Cars (that contains 15 random records of cars):

The RANK function is used to retrieve ranked rows based on the condition of the ORDER BY clause. For example, if you want to find the name of the car with third highest power, you can use RANK Function.
Let’s see RANK Function in action:

The script above finds and ranks all the records in the Cars table and orders them in order of descending power. The output looks like this: 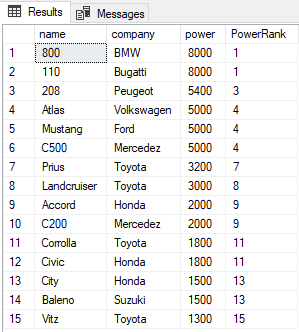 The PowerRank column in the above table contains the RANK of the cars ordered by descending order of their power. An interesting thing about the RANK function is that if there is a tie between N previous records for the value in the ORDER BY column, the RANK functions skips the next N-1 positions before incrementing the counter. For instance, in the above result, there is a tie for the values in the power column between the 1st and 2nd rows, therefore the RANK function skips the next (2-1 = 1) one record and jumps directly to the 3rd row.
The RANK function can be used in combination with the PARTITION BY clause. In that case, the rank will be reset for each new partition. Take a look at the following script:

In the script above, we partition the results by company column. Now for each company, the RANK will be reset to 1 as shown below: 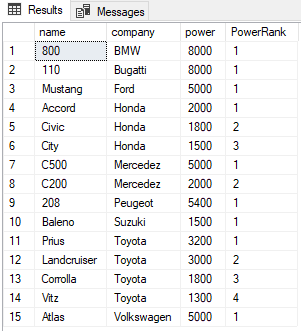 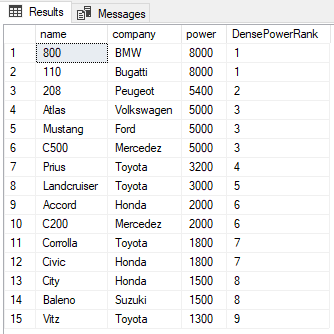 You can see from the output that despite there being a tie between the ranks of the first two rows, the next rank is not skipped and has been assigned a value of 2 instead of 3. As with the RANK function, the PARTITION BY clause can also be used with the DENSE_RANK function as shown below: 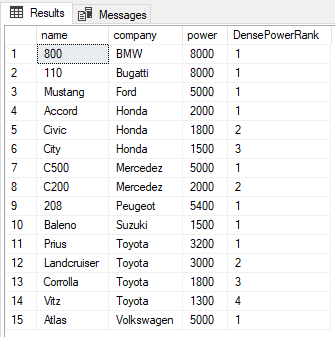 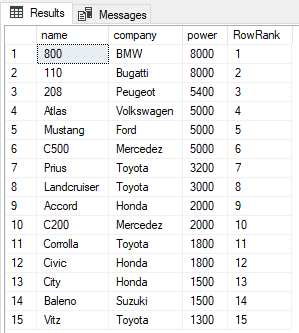 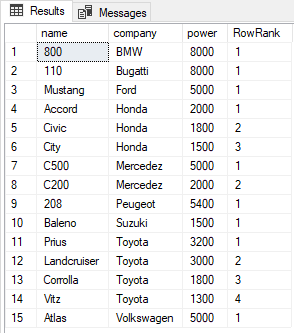 The RANK, DENSE_RANK and ROW_NUMBER Functions have the following similarities:
1- All of them require an order by clause.
2- All of them return an increasing integer with a base value of 1.
3- When combined with a PARTITION BY clause, all of these functions reset the returned integer value to 1 as we have seen.
4- If there are no duplicated values in the column used by the ORDER BY clause, these functions return the same output.
To illustrate the last point, let’s create a new table Car1 in the ShowRoom database with no duplicate values in the power column. Execute the following script: 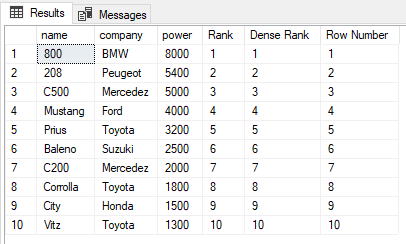 You can see that there are no duplicate values in the power column which is being used in the ORDER BY clause, therefore the output of the RANK, DENSE_RANK, and ROW_NUMBER functions are the same.

The only difference between RANK, DENSE_RANK and ROW_NUMBER function is when there are duplicate values in the column being used in ORDER BY Clause.
If you go back to the Cars table in the ShowRoom database, you can see it contains lots of duplicate values. Let’s try to find the RANK, DENSE_RANK, and ROW_NUMBER of the Cars1 table ordered by power. Execute the following script:
SELECT name,company, power, 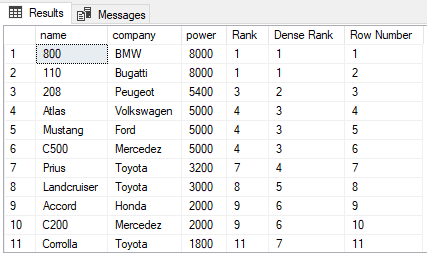 From the output, you can see that RANK function skips the next N-1 ranks if there is a tie between N previous ranks. On the other hand, the DENSE_RANK function does not skip ranks if there is a tie between ranks. Finally, the ROW_NUMBER function has no concern with ranking. It simply returns the row number of the sorted records. Even if there are duplicate records in the column used in the ORDER BY clause, the ROW_NUMBER function will not return duplicate values. Instead, it will continue to increment irrespective of the duplicate values.

To learn more about ROW_NUMBER(), RANK() and DENSE_RANK() functions, read the fantastic article by Ahmad Yaseen: