In this article, we will talk about the tSQLt framework — a free database unit testing framework for Microsoft SQL Server. You can use tSQLt to create unit tests for SQL Server 2005 (service pack 2 required) and all further versions. The main convenience is that you do not need to switch between various tools to create code and unit tests.

Tests run automatically within transactions
This keeps tests independent and reduces any cleanup work you need.

Tests are grouped together within a schema
This allows you to organize your tests and use common setup methods.

Output can be generated in plain text or XML
This makes it easier to integrate with a continuous integration tool.

The ability to fake tables and views, and to create stored procedure spies
This allows you to isolate the code which you are testing.

Before we proceed further, I would like to introduce you an extremely useful SSMS plugin from Devart — dbForge Unit Test for SQL Server. The tool provides a user-friendly and intuitive GUI designed to create, organize and execute test cases with a few points and clicks. It completely automates and simplifies the manual and time-consuming process of unit testing. The tool also cuts down the time spent on unit testing and brings significant cost savings. 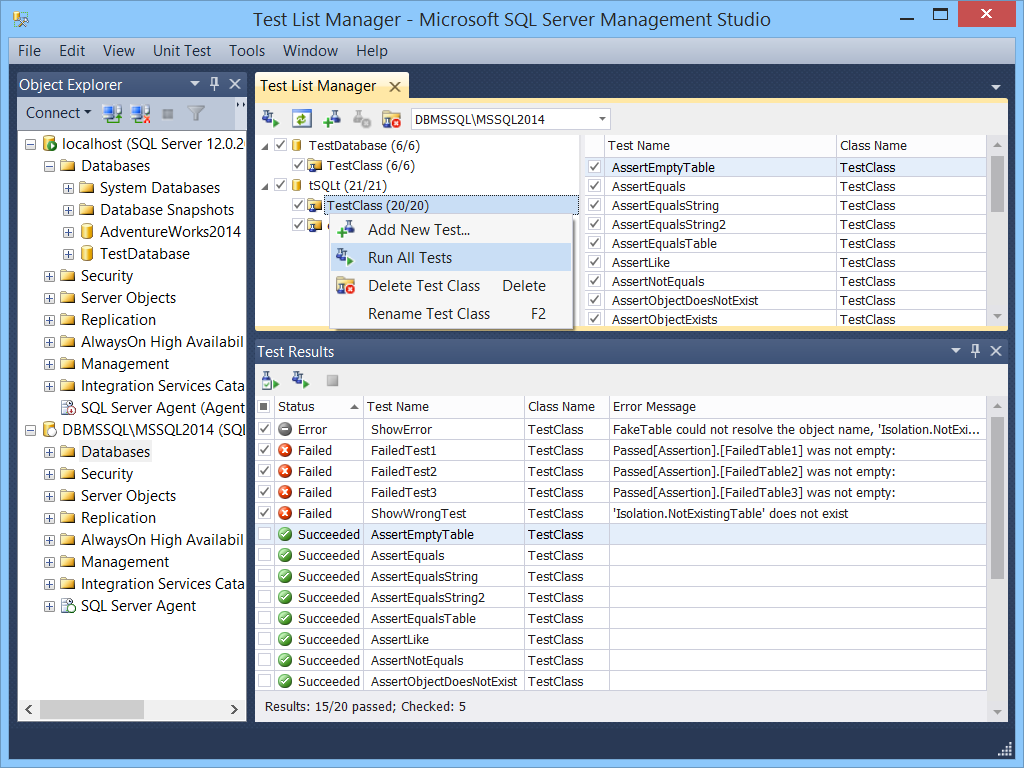 tSQLt is the open source framework and is distributed under the Apache 2.0 license. You can download the latest version of the tSQLt framework from the official site.

Before installing the framework, you need to setup the SQL Server instance to work with CLR.

Also, you need to set to ON the TRUSTWORTHY database property. This property is used to indicate whether the instance of SQL Server trusts the database and the contents within it. By default, this setting is OFF, however, it can be set to ON by using the ALTER DATABASE statement.

The archive contains a script. You need to execute the script on a target database. As a result of execution, the script creates the tSQLt scheme, a CLR assembly and a number of procedures and functions. Some procedures will contain the Private_ prefix. The framework utilizes such procedures for the internal needs.

A test is a stored procedure. For the convenience, tests are combined into “classes” and constitute SQL Server schemes. Schemas have some special properties applied so that tSQLt recognizes it as a test class. You can use the NewTestClass procedure to create a new class.

Each class can have its own SetUp procedure, which will be called before each test.

While creating a new test class, if there is a schema with the same name, all objects in that schema (and the schema itself) are dropped. To create a test case, you need to create a stored procedure on your test class. You can use quotes inside the CREATE PROCEDURE statement to include whitespaces in the test name:

You can use the RunAll of Run procedures to run tests all at once (on all classes) or one at a time.

You can call the Run procedure in three different ways:

The procedure “remembers” what parameter was used the last time it was called. If the procedure is called with no parameter, it executes the last executed test case or test class.

If you ever used any framework for unit tests, you might be surprised to discover that tSQLt is no different. One of great features of tSQLt is “test isolation” that is based on the transaction mechanism. In addition, tSQLt provides useful procedures that help to determine what went wrong in the test.

At this point, you need to prepare the database objects that will be used by the code under test. In other words, you need to substitute those objects with placeholders, stub and mock objects. What you can substitute:

FakeTable creates a copy of a target table with no data:

By default, calculated fields, default values and identity columns are not saved, however, this can be changed using the optional parameters: @identity, @ComputedColumns и @Defaults. The function can not substitute temporary tables, objects in other databases, as well as it does not preserve foreign keys. The function will create the Stub placeholder that you can fill in with the test data, without the need to change a real object. This will give you the opportunity to run the tests independently (multiple users can simultaneously run tests on a single instance of SQL Server).

FakeFunction will substitute a real function with the Stub placeholder:

This is the easy part. You simply run the code that you want to test. Nore that if you expect the test code creates an exception, you must notify tSQLt by calling the ExpectException procedure.

Now, we can create a new test class.

Now, we can add one test for each procedure.

To run both tests, we can use the Run procedure and pass it the name of our test class (TemperatureTests).

As it is expected, tests are successful.

Do not forget that when you run a test, tSQLt wraps it in the transaction. Therefore, be careful if your stored procedure uses it’s own transactions. For example, the following test procedure fails: