Our journey to MySQL started with CREATE TABLE followed by INSERT. Today, we are proceeding to the MySQL DELETE statement. It is almost as common as the MySQL UPDATE statement.

Since you are familiar with T-SQL DELETE, the goal is to make you more productive using the MySQL syntax. There are minor differences in these DELETE statements, but there’s nothing that you can’t handle. Let’s get started.

One of the most common needs is the MySQL delete row task. We’ll examine it here, but first, we have to prepare our working area. To delete any records, we first need to have them. Thus, let’s build a database in MySQL.

I’m feeling nostalgic about TV series from the ’80s, so I’m going to use episodes from MacGyver and Quantum Leap for sample data. I have the final Excel file to import the data into a new database. This file has 2 sheets named Titles and Episodes. We will import them both into two tables.

Before importing data, we should come up with a database named tv-series with two tables called Titles and Episodes. The MySQL create table job is elementary with the proper tool. I am using dbForge Studio for MySQL, and the following Figures 1 and 2 display the visual table structure of my database presented by that tool.

The script for the tables is below:

After creating the database and tables, we can import our data from the Excel file.

The most straightforward and powerful tool I used to import Excel files to MySQL is dbForge Studio for MySQL. I especially appreciate the addition of a new column as a primary key in the target table. Also, the autodetect date and time format is great support. It converts dates with a text data type and strange date formats without hassles.

Since we are going to compare the MySQL syntax to T-SQL, you may also import the Excel file to a new database on SQL Server. Then, use the same database and table names as in MySQL.

1. Delete All Data from Table

First, the easiest. Let’s try to back up the Episodes table and then delete the records of the backup. We’ll perform the standard MySQL delete all rows operation that you may need to do in different situations.

As you see, the syntax is the same as for T-SQL. The query will delete all records in the episodes_backup table.

A few notes for you:

2. Delete WHERE in MySQL

The second point is about using DELETE with a condition, the MySQL delete from select operation. This way, you can delete one or more records in a single statement, but not all of them. For instance, delete first row or other specific row/rows. What if you are looking for a way of how to avoid duplicate records in SQL? Using the WHERE condition would be the solution.

Again, the syntax is the same in T-SQL:

Nothing extraordinary here, but the next section will be different.

LIMIT is equivalent to TOP in T-SQL. Before we have a DELETE example, let’s query records we are going to delete. Check out the code below:

Here is your LIMIT. It will result in 2 records as shown in Figure 3 for the card view in dbForge Studio for MySQL:

Now, let’s try to delete them. Take a look at the example below:

Before deleting 2 episodes, MySQL queried all episodes from 1987. Then it sorted them into season and episode numbers. Finally, it limited the results to 2 records. It is also a suitable method when we need to delete duplicate rows. It lets us specify the conditions for deletion and make sure that we won’t delete anything necessary (but making a backup would still grant the data safety).

Is there a T-SQL equivalent? Do you think this will work?

If you paste the above code in SQL Server Management Studio, you’ll get squiggly lines in the ORDER BY clause. Yet, TOP is allowed.

If you remove the ORDER BY clause, though, your query will delete 2 random records. Finally, the above code will not run as expected.

To have the same result as in MySQL, you need the following code:

It’s a bit longer in T-SQL than in MySQL. But there’s more.

Another way to delete records is using it with a JOIN that will filter records you want to delete. As many users define it, it is the MySQL delete join task. Nothing looks different when you’re not using a table alias. Check the example below:

This will also work in T-SQL. But if we use a table alias like this:

MySQL will throw an error. The correct syntax is below:

Finally, we try using subqueries. It is a different way to filter records you want to delete. You already saw the example one earlier, but let’s have it again:

This is perfectly valid syntax in T-SQL. But will it work in MySQL? Let’s change it slightly:

Oops! Looks like we hit the wall. Here’s what MySQL says:

What if we remove the LIMIT keyword? It triggers another error:

You can’t specify the target table ‘episodes’ for an update in FROM clause.

Is there a workaround? Changing the code to a nested subquery will run just fine:

That should do it. But let’s have a more sensible example:

Now, what’s the big deal with these examples? Let’s see:

Get your FREE PDF with useful code examples below

So far so good. You have three DELETE syntax comparisons for MySQL and T-SQL. I hope the third installment will also prove useful to you in the future.

You can easily see the ways of the MySQL delete column task performance, or delete any row, multiple rows, and specific records by conditions.

If you liked this post, feel free to share it on your favorite social media platforms. Let us also know what you think in the Comments section below.

Next Story
How to Use Multicast in SSIS with Examples 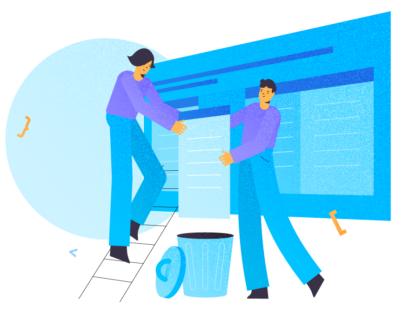 Is SQL DISTINCT Good for Removing Duplicates in Results?

PRINT statements are crucial in any programming language. They will allow the routine or program that you are running to dump some type of...
Read More →

How to Make the Best Use of Comment Function in MySQL

Comments are used to add information to the code. It is mostly ignored by the compiler, but human specialists can read those comments when...
Read More →