Docker and SQL Server on Linux

SQL Server 2017 is the biggest release and most important releases in the Microsoft product history simply because of the freedom that it gives to install the product anywhere. The advent of the Docker containers and growing emphasis on open source solutions opened the door to greater technological innovation and advancement.

This article discusses the following topics:

So let’s get started exploring the new-found Docker container.

Docker provides an elegant platform for API packaging for container management. It eases out the complex design process of application packaging by incorporating the dependent components into the container image.

The support for Linux and Docker containers came with the release of SQL Server 2017, which opens up the various options for installing and working with SQL Server 2017 on those platforms. SQL Server 2017 is no longer a platform dependent of the database offering. Its footprint is widespread across other flavors of the operating system as well. This new capability allows developers and open source users to test the full-fledged SQL Server instance at a lower cost.

In this quickstart, we will learn how to install the Docker on Linux distros and how to incorporate the SQL Server 2017 container image. In this case, Docker provides a platform to bundle only the required resources for SQL Server 2017 into a fully self-contained unit. In the case, the container will include only the pieces of the operating system that it required, including any drivers, system libraries, or other resources needed to make SQL Server instance fully functioning. This option keeps the size down since only the bare minimum components are included in the container.

This capability makes containers highly portable since they don’t have any external dependencies. It is possible to create a Docker image on one machine, then move or copy it to another and ensure that it’ll still work in the same way.

Microsoft offers a number of different container images that we can pull. They will be identified by tags during the installation process. In most cases, we’d specify a 2017-latest image to get the most current version of SQL Server 2017, but there is an option to pull an image with an earlier cumulative update as well. On this site, we can see the different tags that are available for the Docker images.

For the entire demo, I will be using the Docker Centos CE(Community Edition) container. For the production use, the documentation at this URL will help us to obtain the required licenses and images, if this applies to your situation.

So far we’ve set up with Docker container on CentOS. 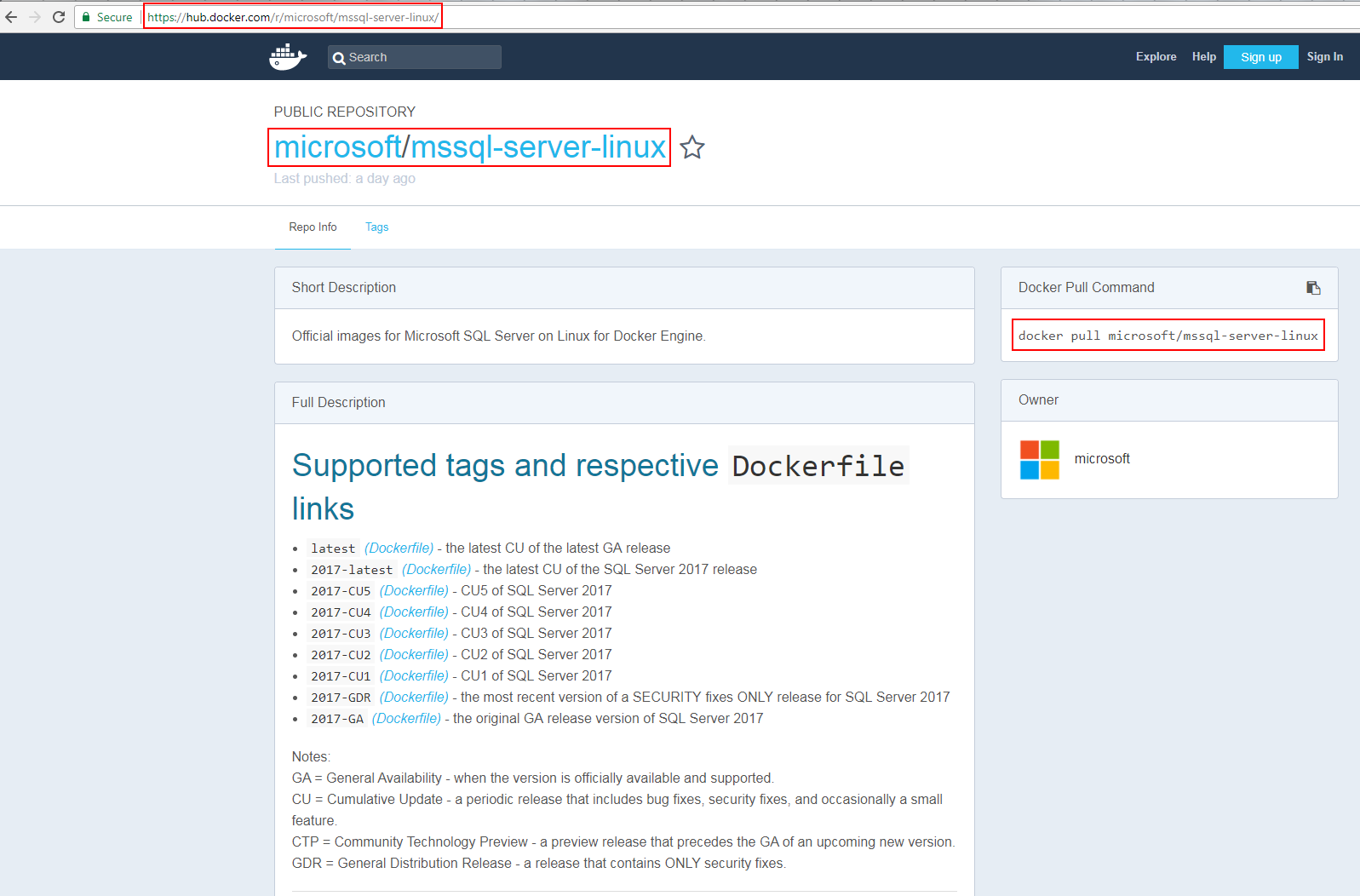 On the right, copy the docker pull command to extract the SQL Server 2017 image. We can specify a specific image from the list of tags in the public repository on the docker hub. Append the colon and then 2017-latest in command only gives you the most current image for the SQL Server 2017 release. You can also just simply put latest without 2017 and the hyphen to download the latest available release.

Once the pull is complete, we can create a container from this image. We’ll do that with the sudo docker run.

Now, we can see that the container is created. We can see the status of all Docker containers with the command docker ps -a

The parameters are discussed in the below table.

At this point, your SQL Server Docker container should be up and running.

Use the command docker exec –it to specify the name of the container to connect. In this case, it’s SQLServerDemo1. Then indicate the interactive shell that we want to use, which is bash, and this is simply the command language that we’re going to use for working with Linux.

Now, we can notice a prompt change. This indicates that we are inside of the Linux container. Since SQL Server 2017 is already installed, run the sqlcmd tool by specifying its path, type /opt/mssql-tools/bin/sqlcmd to pass the parameters to get connected to the SQL instance.

In the following example, the sqlcmd is used to connect to SQL Server. In this case, we did not specify the server in the connecting string that indicates that the connection is made to the container internally. 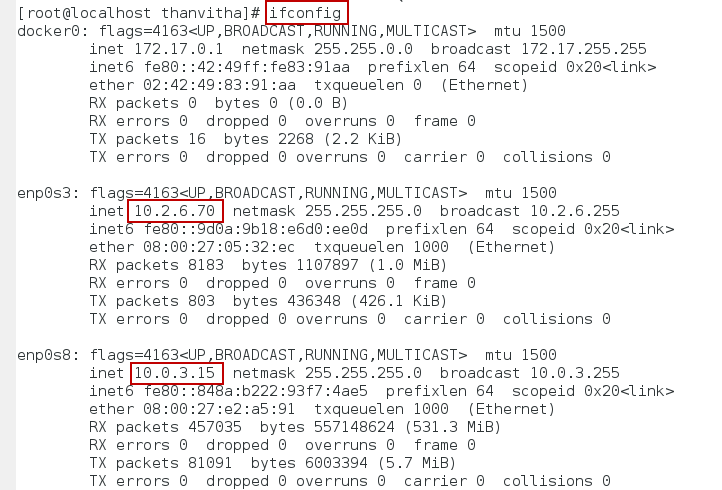 In the following example, the SQL Server is connected using sqlcmd from the Linux machine to Docker container. 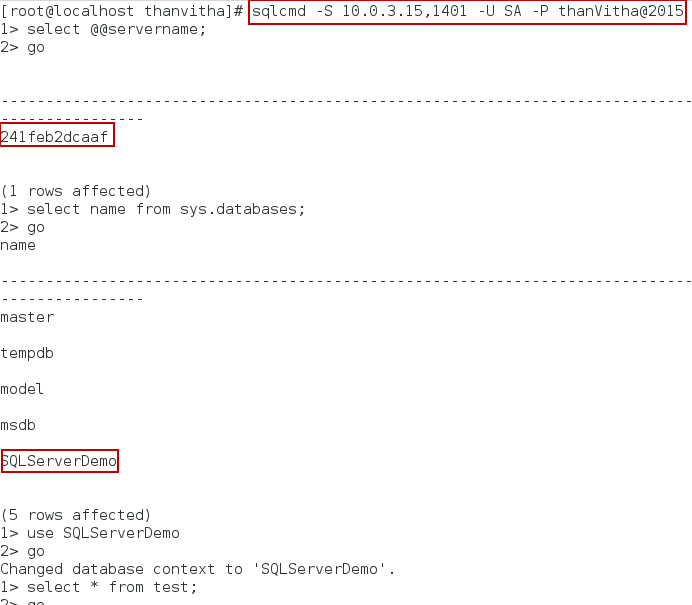 Run sqlcmd with the specification of the IP address and the port mapped to port 1433 of the container. In this example, that is port 1401 on the host machine port. 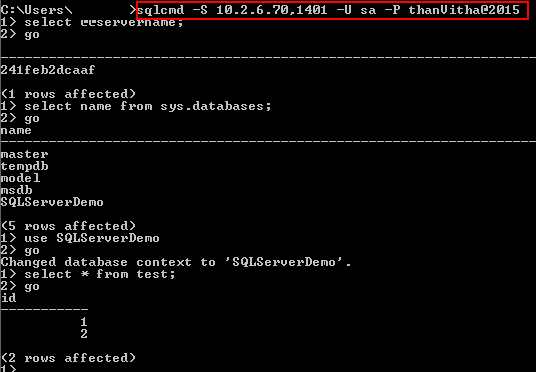 We can also connect the container from the SSMS tool and query the database and its related objects. 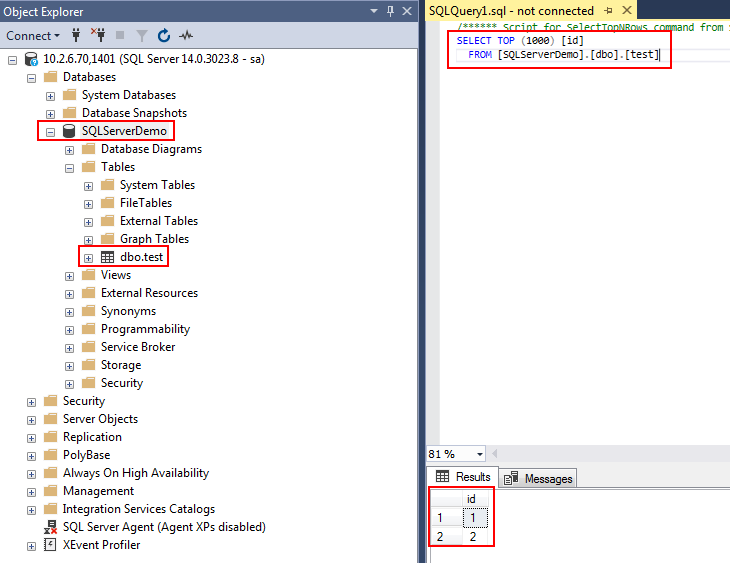 The speed and portability of containers should make Docker containers are more affordable, practical, and more easily tested. The entire setup is done in very few minutes. The steps are no different for Windows and Mac OS. Browse, https://www.docker.com/community-edition to download the respective libraries and start using it. It gives a platform an independent offering to develop and test their applications. In this article, we saw how the Docker container can be built on CentOS Linux machine. It truly gives freedom and platform independent offering for developers and administrators to deploy and connect any platform they wish.

How to install MySQL Server on Ubuntu 18.04 in 2 Different Ways

This article will present the step-by-step installation process of the MySQL server on Ubuntu. For demonstration purposes, I created a...
Read More →

In the previous article, I explained how we could install Ubuntu 18.04 and SQL Server 2019 on the virtual machines. Now, before we proceed...
Read More →

The previous article explained the creation of a virtual machine using Oracle VM Virtual machine. Now, we will learn how to install Ubuntu...
Read More →