This article talks about shared volumes and the preferred mechanism for data persistence using the Docker containers.

This article covers the following topics:

Containers are independent of the storage engine and volumes. Let’s discuss briefly on how Docker accomplishes the idea of images and containers. How does the layer organized in storage and keeping them isolated, letting them be stacked on top of each other as layers?

We are in the era of rapid development and faster deployment; we also know how to do a release faster. Now, we will see how to build the application and port it as a micro-services using containers with data persistence.

Docker offers the solution of data externalization and this feature is called volumes. The volumes are like a shared folder or the directory structures of the file system. They’re virtual discs that you can store data in and share them between the containers, and between containers and the host or both. So they have two main varieties of volumes available within Docker.

We’ve got the persistent ones, where we can place the data there, and it will be available to the host. And when the container goes away, the data will be still available. And, another one is ephemeral volumes. They exist as long as the container is using them. But when no container is using them, they evaporate. So they’re ephemeral. They’ll stick around as long as they’re being used but they’re not permanent. These are not part of images. No part of volumes will be included when you download an image and no part of volumes is going to be involved if you upload an image. They’re for your local data, local to this host. So first let’s talk about sharing data between the host and a container.

The underlying file systems manage and determine which bits on the drive are part of which file and it’s up to the kernel with the file-systems to keep track of every file. Now on top of all that, you can take programs, and programs can pretend to be file systems. We call this FUSE file system. For a detailed example, you can refer here.

Let’s see an example to understand the how the layers work in Dockers. For the demo, I’ve created two folders in the home directory named SQL Server and MongoDB also created few files in each directory.

The following list of the commands ensures the creation of the files in the respective directories. 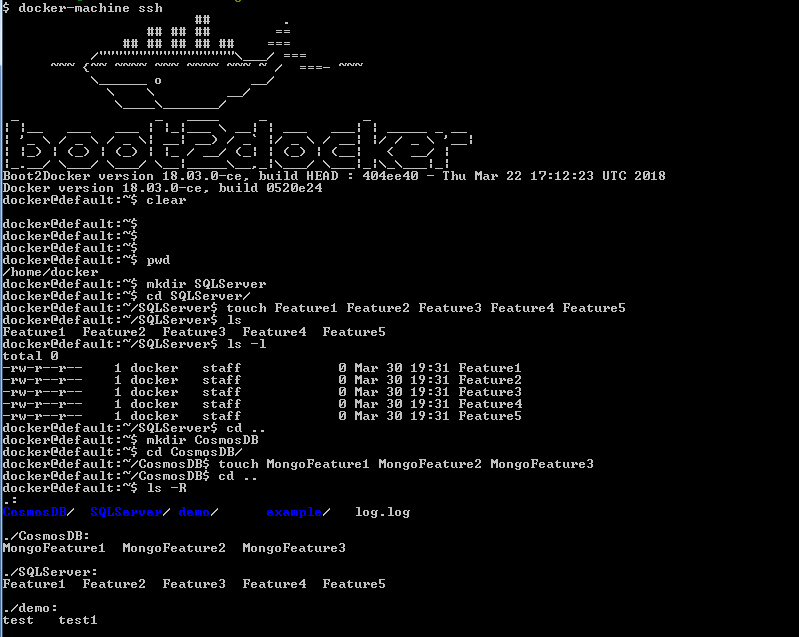 Let’s take a look in the CosmosDB directory. CosmosDB has the same files of SQL Server. I didn’t copy the files; instead, I just layered one set of files on top of the other. In fact, we can take a look at that layering by executing the df –a command. The –a option binds mounts as well.

There’s just another directory that SQL Server mounted on top of the CosmosDB directory. When I unmount, they’ll come right back again.

Now, let’s take a look at the directory structure. Everything is exactly the way it was. I just placed the file system temporarily on the other file system layer. This is how Docker does the shared folders between a container and the host.

Let’s discuss sharing data back and forth between this host and the Docker containers.

First, let’s get into the Linux host using

Inside the container when I run it, the data is going to be found under /sharedfolder.

Let’s go ahead and create a file named test1. Now, when I exit this container and browse the demo folder, there are test and test1 files.

So the file is shared with the host.

Now, let’s talk about a more interesting case of sharing data between the containers. This introduces a new argument to the Docker run, called volumes-from.

These are shared discs that exist only as long as they are being used, the scope is limited and its existence is limited. When they’re shared between the containers, they’ll be common for the containers that are using them.

Let’s create a volume for the container which is not shared with the host.

docker run –it –v /demoshare creates the folder and runs it on the centos:latest container with a bash console.

Let’s create a file with some data on the container using the cat command.

Now, start up another Docker container, call it has the second session. First look up the name of that container that I just started by running Docker ps –l.

Put the docker run command, then –volumes-from (this is the new part), then paste in the name of the machine that has the volumes I want to use. The image, centos:latest and the console to start with the container is bash. Now if I go look in /demoshare using the following command, it will list the file layered on the new container.

Create another file, share_between_containers_1 and add some content to the file.

Now exit the original container, the demoshare is still there. Let’s go ahead and start up a third container, repeat the same steps that we followed for creating a second container.

Now, when I exit both of these containers, this is the important part to understand, right then when I exited the last container using this volume, it went poof! And now it’s gone. That’s what volumes are for. They are ephemeral. They can be passed from one container to the next, but they are not saved. They will eventually go away.

To view the list of all the volumes that are attached to the host machine use docker volume ls:

We can also find out where the volume exists on the host machine using the docker inspect command:

We can also get the similar data using the docker volume inspect command:

To delete the volumes, use the docker rm <Volume Name> command.

In this section, we will discuss how the application database data externalization is possible using the Docker volume option. As long as the containers remain intact with the host, the data will remain safe even if the container is stopped or restarted. However, if you remove the container, your databases get removed with it and it’ll be gone forever.

Let’s discuss the Docker’s solution that keeps the data safe across containers using a Docker data volume. It is that simple, during the SQL Server container creation, map file directory to the SQL Server database using the –v parameter.

-v, this is where we’re going to specify the volume information. Create a new volume sqlservervolume and map it with the internal directory structure of the SQL Server instance, or the Linux instance, where SQL Server stores its data and log files. In this case, the default volume location /var/opt/mssql is mentioned.

Now we’ve created the Sqldemo container. Now, instead of storing database files within the container, the data files are stored in the /var/opt/mssql directory, the container data is now externalized. Its stored in the sqlservervolume data volume. We can take a look at volumes using docker volume ls.

Let’s go into the container and create a database using the docker exec command and sqlcmd.

Now, create a new SQL container and link the existing volume to the SQL container. The new SQL instance is going to be Newsqldemo.

Let’s go into the Newsqldemo container and make sure that we still have the database that we’d created earlier in the demo.

Once we get into the SQL shell, query the sys.databases system object. This will list all the databases of the Newsqldemo instance.

That’s all for now…Stay tuned for more updates.

Docker containers definitely a choice and talking point for many developers for its rapid development and seamless deployment process.

Docker doesn’t give you a way of saying mount this guest file system into the host, preserving what was on the guest. It always chooses to mount the host filesystem over the guest filesystem.

You can also have multiple containers linked to this single volume in order to have them share a common storage resource. With Docker volumes, you can save data across multiple Docker containers or share data between several containers at the same time.