In the previous article, I explained how we could install Ubuntu 18.04 and SQL Server 2019 on the virtual machines. Now, before we proceed further, let’s go through the configuration.

The previous article explained the creation of a virtual machine using Oracle VM Virtual machine. Now, we will learn how to install Ubuntu 18.04 and SQL Server 2019 on Linux.

First, we need an operating system ISO file. Once the file is downloaded, we mount it on a virtual disk drive:

In my previous article, I have explained the step-by-step process of installing SQL Server Failover Clustered Instance. In this article, I will explain how to add a secondary node to the existing failover clustered instance.

Once SQL Server is installed on an SQL01.dc.Local node, connect to SQL02.dc.Local and run setup.exe – SQL Server installation wizard opens. In the wizard, select “Installation” from the panel on the left and click on “Add node to a SQL Server failover cluster”. See the following image: 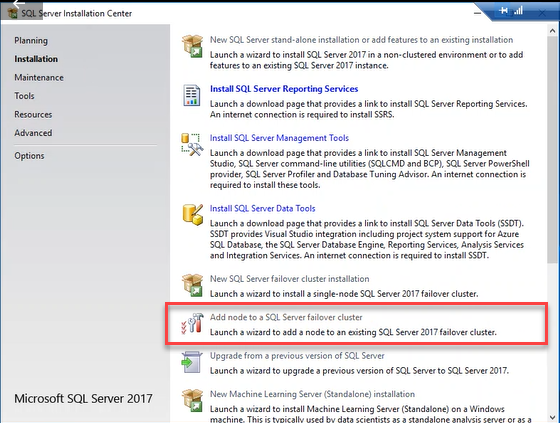 END_OF_DOCUMENT_TOKEN_TO_BE_REPLACED

Recently, I was assigned to a project – our customer purchased a new SAN, and they wanted us to replace the old one with a new SAN. User and system databases utilized SAN, meanwhile, the operating system and SQL were installed on the server’s local disks. Lucky us..!! The idea was to move the existing user and system databases to a new SAN and keep the downtime as minimum as possible. So, to minimize the downtime, instead of reinstalling OS and SQL, we decided to use the following approach.

END_OF_DOCUMENT_TOKEN_TO_BE_REPLACED

In my previous article, I have explained the step-by-step process of installing a node in existing SQL Server Failover Cluster Instance. Along with that, I have also demonstrated manual failover and automatic failover.

In this article, I am going to demonstrate the process of adding a disk in a failover cluster and then move the existing database to a new drive. END_OF_DOCUMENT_TOKEN_TO_BE_REPLACED

In this article, I am going to explain the process of installing SQL Server on failover cluster instance (FCI) on the primary node. First, let’s look at the prerequisites.